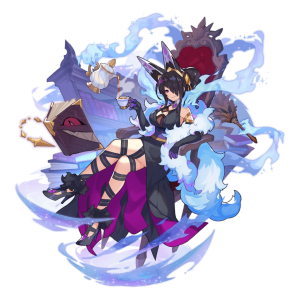 Cassandra is Dragalia’s third 5★ Shadow Wand user, facing stiff competition right off the bat. Two notable attributes are her damage reflect Skill and Resilient Offense. Although Cassandra thrives at low HP, she’s hard-pressed to take full advantage of her kit; the risk is two-fold given ranged adventurers’ higher fragility and High Jupiter’s unforgiving Static stacks. With both Veronica and the almighty Gala Cleo looming over her, Cassandra’s true boon is that she’s available year-round in the permanent summoning pool.

Cassandra’s stacking %HP buffs add greatly to her bulk over longer content such as Raid events.

Resilient Offense lives up to its name, giving up to a 30% permanent Strength bump. Cassandra is able to start High Jupiter’s Trial with one stack owing to the opening HP check.

There’s no justifiable reason to run Cassandra over Gala Cleo, and even Veronica’s kit is easier to manage. Wand slots on Shadow teams are simply too contested.

Shinobi's 90% Skill Damage is too juicy to pass up, especially for Skill-based classes like Wands.

Juggernaut is easily unbound and is a functional 4★ alternative.

Pair 1: General purpose Wand setup, prioritizing Skill Damage and Skill Haste. RR may be substituted with Heralds of Hinomoto, while UBOV can be replaced with any %STR pick such as Bonds Between Worlds or Jewels of the Sun.