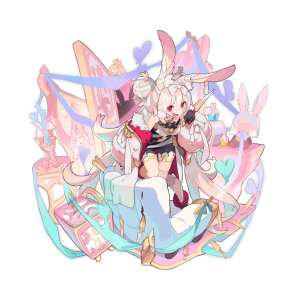 Chelsea appears as the flagship of Madcap Misfits and takes “high-risk, high reward” to the next level. Thanks to Obsession, Chelsea saps her own HP to deal damage, and like Veronica, dropping herself below 30% HP grants even more damage output. Where Natalie’s kit is a one-and-done chunk with a fallback plan, Chelsea must play more carefully, timing Love’s Liberation for maximum damage while also avoiding death. Her “risk” aspect is more glaring than most. A 20% DEF drop, ranged adventurers’ lower base DEF, and using HP as currency means that Chelsea cannot afford to take stray hits. That being said, Chelsea's potential is staggering as she can outdamage the entire Flame roster when piloted correctly. It’s not a bold claim to call Chelsea Dragalia’s highest skill cap adventurer.

Chelsea enjoys two counts of 30% STR from Obsession and another 20% when below 30% HP. Those who can master her kit and stay alive will see damage numbers like no other.

After its initial cast, Obsession will be active close to 100% of the time, stacking with itself and granting an enormous baseline STR boost. The increased attack rate at lower HP also increases SP gains.

Juggling between survival and staying below 30% HP is made difficult by both Obsessive Love’s DEF drop and ranged adventurers’ natural squishiness. Players must also account for heals from Love’s Liberation and the team’s dedicated healer, which may result in suboptimal damage.

Ifrit is a viable 4★ alternative to the plethora of 5★ Flame options.

Pair 1: Luckily, both Bow-specific Wyrmprints are HP-independent and do not clash with Chelsea’s kit. Flash of Genius may replace DD while providing some Wind Res to cover for Chelsea's nonexistent bulk.

Pair 2: Best suited for shorter quests, this set acknowledges and embraces the fact that Chelsea will often be at low HP.