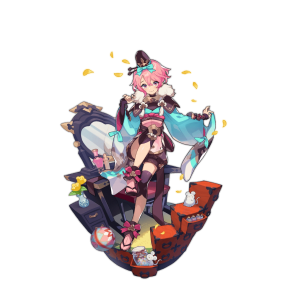 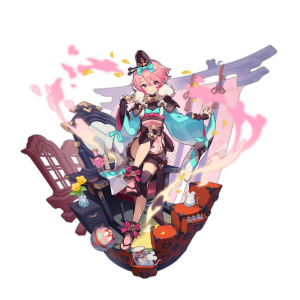 Chitose makes his (yup, his) mark as Light’s undisputed Wand user. Akin to Noelle and co., Chitose ignores personal damage in favor of boosting his teammates’ power to eleven. In contrast to traditional Wand users, Chitose stays healthy with a smorgasbord of defensive utility. Although passives like Buff Time or Skill Haste would have been preferable, Love & Acclaim’s STR boost is simply too good to pass up.

A carbon copy of Best Regards, but for Light adventurers only. Amplifying powerful allies is more meaningful than any damage Chitose could provide on his own.

In addition to an innate DEF boost, two %HP shields do well to mitigate chip damage.

Chitose relies on powerful teammates to pick up the slack. Team comps with healers will greatly lessen Love & Acclaim’s impact.

Cupid’s utility is in line with Chitose’s role as a support adventurer.

Lindworm is an accessible yet functional option.

Pair 1: Contributes both Skill Haste and Buff Time, essential perks for a support adventurer. Slot 2 may be replaced with From Whence He Comes or other Buff Time prints.