Curran’s kit is that of a straightforward, no-frills damage dealer, with extra Overdrive damage and a nifty Defense Down built into Circular Judgment. 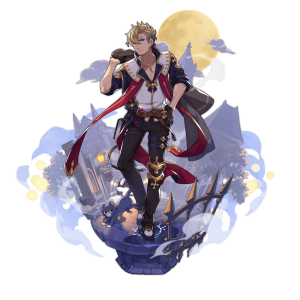 Curran makes a grand entrance as a featured 5★ Adventurer of The Accursed Archives, challenging Ieyasu for the title of strongest Shadow DPS. Where Sazanka draws power from her afflictions and Force Strikes, the Dogged Inquisitor is more straightforward, wielding two damage Skills backed by one of the highest STR stats in the game. Though lacking in depth, Curran’s kit cements him as a reliable Shadow powerhouse whose damage is mostly free of conditional gimmicks.

No restrictions, no RNG. Simply hit your targets and reap the rewards. Curran’s power is most pronounced when bosses are in the Overdrive state. Unlike other Axe wielders, Curran is unreliant on Force Strikes, allowing him to maximize his SP gains by completing basic attack chains while still quickly depleting Overdrive bars.

Full resistance to such an erratic affliction puts Curran at the forefront of all Jupiter content. A defensive Co-Ability will lower the HP requirements for eventual High Jupiter Trials.

Curran has the low HP pool expected of a Blade or Dagger wielder but without any sort of mobility. That being said, Curran doesn’t mind being a little reckless if he intends to make use of his massive Last Offense buff.