With several utilities built into her first Skill and an easy Strength passive, Cleo hits hard and buffs the team comprehensively. She also stands out for her self-sufficient ways to raise Energy Levels (both through Starlit Gift and the 35 Hits = Energy Level Up Ability) and high Strength. 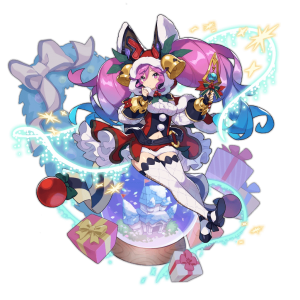 The flagship of Dragonyule Defenders, Cleo has forsaken her staff for dispensing powerful Water DPS. Wielding Daggers, Stun immunity, and a forgiving 70% HP STR boost, Dragonyule Cleo makes a name for herself as the queen of Flame IO. She is the second adventurer to utilize Skill Shift and also embraces the energy system alongside her bannermates, providing excellent synergy to both herself and her team. Cleo sets herself apart from other energy-inclined adventurers in that raises her own her energy level via combo hits, which benefits Daggers for any content.

Inflicts freeze, raises energy level, and activates Skill Shift, all with high uptime due to a low SP cost.

Instead of using skills or slaying enemies, Cleo needs only to hit her target. Daggers make this an effortless feat, quickly racking up combos and building towards five energy stacks.

Though DY Cleo has a lofty HP stat, she is still a Dagger user and thus relies on strong control and use of iframes to stay alive on the frontlines.

Although she excels in day-to-day Flame IO, Cleo is barred from pursuing endgame Quests such as High Brunhilda.