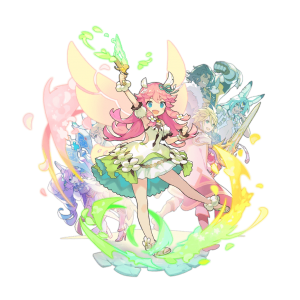 Well sweet sassy molassy, Notte’s finally joined the fight. And what’s that she’s got there? A KNIFE. Standard daggers were already quick to rack up combos, but Notte’s unique attacks are closer to rapid-fire manacasters. Her unique shapeshift can be compared to dragondrive kits, immediately readying two nuclear skills for use.

Timed with the release of Legend Ciella, Notte comes prepared with not one, but two sources of dispel and does wonders for keeping Ciella’s DEF buffs under control. While traditional Poison comps got too comfortable with Master Ciella, Notte is one of few Stormlash-capable adventurers and helps enable Sweet Surprise loadouts.

One of few adventurers who can keep up with Legend Ciella’s copious DEF buffs, Notte packs dispel on both of her skills.

Although Notte only contributes to the Stormlash chain while shapeshifted, she remains part of a shallow pool of those that carry the affliction.

Bog and Freeze are especially nasty afflictions, and complete immunity to both is a powerful asset.

Metamorphosis gauge filling is directly tied to maintaining a 20+ combo count. While dagger users usually have no problem racking up combos, high pressure bosses like Ciella may force Notte to abandon her stacks in order to survive.

Unlike adventurers like Joker and Tiki, Notte will not shapeshift while under AI control, limiting her solo viability.

Midgardsormr Zero is a close second whose combo count requirement aligns with Notte’s own.

Vayu is a reliable choice who isn’t too far behind the top two picks.

Should You Summon: Regina

Should You Summon: Gala Zethia and Gala Bahamut

Should You Summon: September 2021 Shackles of the Syndicate Ft. Gala Mascula and Thor

Waited a long time for all these medals (DL Flex Post)
When they introduced Medals I was a little scared but excited to see how to get them…
Void catoblepas drop rewards problem
I tried farming for the rare void materials so that I can unbind the weapons. I got…
Need Agito Mats but don't wanna auto Masters? Do I have a story chapter for you!
With the recent story update for Dragalia Lost, Chapter 20’s 7-2 Level on Very Hard is…
Hundredfold summon time :longcat:
How much eldwater did you get My stuff Soooo many dragons (click for more details) …
Dragalia Lost Song Collection is now officially on Apple Music and Spotify!
To coincide with the CD of said music releasing, they went and put the songs up on…
Read More