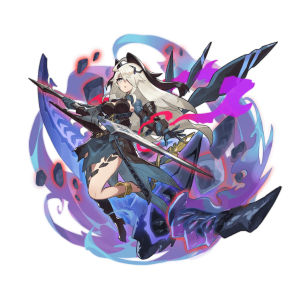 At the turn of Dragalia’s 3rd anniversary, Zethia arrives as a playable adventurer for the first time. Right from the get-go, the Auspex of Genesis has several unique features that set her apart from cookie-cutter DPS units:

Unlike her other Shadow blade counterparts, Zethia isn’t gated by HP or bleed. Instead, Zethia reaches her full potential by completing a (lengthy) standard attack chain. Ordinarily, expecting to execute a 9-part combo uninterrupted would be unrealistic, but Zethia boasts a special dodge that allows her to pick up her combos right where she left off. Massive DPS in combination with multiple amps makes Zethia a power pick in all endgame content, Curse of Nihility or otherwise.

Packing the longest standard attack chain to date, Zethia is one of few units in the game that doesn't rely on skills for DPS. At the 5th and 9th hits, Zethia is rewarded with a new Crit Damage amp, culminating in a potent 20% boost at team level. Dodging does not reset this chain, however try to avoid dodging multiple times in a row without weaving in a standard attack.

As is Gala tradition, Zethia completely resists all Light-related afflictions, allowing her to dish out damage without fear.

Zethia lacks both Poison and Shadowblight, relying on her allies to enable punisher loadouts. While her amps are powerful, they are locked behind relatively strict conditions. Furthermore, no "true" utility like dispel makes fights like Kai Yan a challenge.

While Bahamut is powerful in its own right, Zethia loses out on more reliable burst from the active skills of the shadow dragon roster, not to mention the ability to tank dangerous attacks with dragon form.

Gala Bahamut grants a ludicrous STR boost and allows Zethia to summon her own Bahamut immediately.

Gala Reborn Nidhogg is also a powerful pick whose numbers speak for themselves.

High Zodiark / Nidhogg are excellent options whose 5th unbind make them strong picks (for the first 3 minutes of a quest).

Welcome to the Opera!

If lacking either affliction, substitute with Levin's Champion or another Crit Rate/Crit Damage pick.