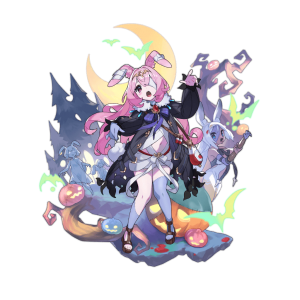 The co-star of Halloween 2.0, Melsa joins a long line of buff-oriented Wind supports. Although heavily outclassed by veterans like Tobias, Melsa has a few tricks up her sleeve to distinguish herself. Longer fights like Master Ciella’s Wrath will appreciate reduced Poison Res since the boss’s immunity is not reset between phases like with Expert. Furthermore, her Skill 2 acts as a second Strength buff, giving her a leg up over the likes of Dragonyule Xainfried.

Most of the Wind roster wants to utilize Poisoned Punisher loadouts, and Melsa greatly extends the window in which they can be abused.

Although her Skill 1 costs almost 5k (compared to the <4k costs of other buff bots), Lances sport the highest SP gains of all weapon classes. Additionally, Melsa enjoys both range and mobility that Wands like Noelle and DY!Xainfried envy.

Wind buff bots are a dime a dozen, and competing with titans like Tobias and Noelle proves difficult in practice. Melsa’s lack of built-in Buff Time doesn’t do her any favors either

Ariel is a strong alternative, but her STR boost is utterly useless on Melsa.

Endurance of the Dead I

Endurance of the Dead II