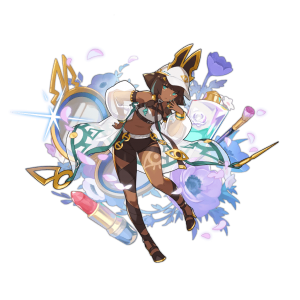 Incognito Nefaria disguises herself as a Flame Wand but make no mistake, she is no charlatan. Although classified as “Attack”, a better description may be “tactical nuke”. Notable factors include innate Skill Damage, boosted Crit Dmg, and easily attainable Energy stacks. These traits allow her to beat out the next best Flame Wands by a respectable margin and grant her monstrous burst potential. That being said, skipping Skill 2 entirely actually results in slightly superior DPS, but just having the option is nice for finishing Broken bosses.

Nefaria must wind up for 6 entire seconds and locks herself out of dodge-rolling for i-frames. This places higher emphasis on timing and positioning, with high-pressure content like Volk posing several challenges to using Ancient Incandescence.

Nefaria contributes nothing to the team but raw damage. While other top tier Flame picks run team buffs, Dispel, Burn, or other utility, Nefaria has to fall back on her big numbers.

Gala Mars is the industry standard without a doubt.

Apollo exploits the Burn meta well despite Nefaria's own lack of Burn.

Cookie cutter Flame Wand setup. Slot 2 alternatives include non-Flurry Strength picks such as Beautiful Nothingness and United by One Vision.