Laranoa has a perfect kit with no immediate application. She has an excellent team buff, enormous potential for Skill Damage (with her passive and matching Wyrmprints) and very fast SP charge. Easily among the best Bow users, Laranoa awaits her time to shine. 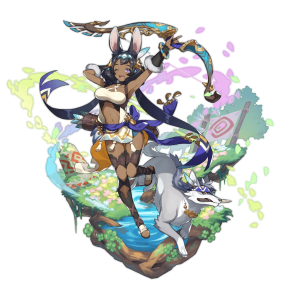 Laranoa is the featured 5* of Hunt for Harmony and a much needed addition to the ranged Water lineup. While Lily is a glass cannon known for AOE and Freeze, Laranoa’s strength lies in her reliable single-target DPS. A Skill Haste Co-Ability and an increase skill gauge fill rate allow Laranoa to fire off attacks in rapid succession.

Unfortunately, Laranoa seems to suffer from a case of mistaken identity. Stun immunity keeps her safe during Flame IO, but Bow users are ill-suited for such high density content. She yearns to be alone with a boss, but is disqualified from High Brunhilda due to a lack of Burn Res. Those struggling with higher end Flame content will likely find better performance elsewhere in the Water lineup.

Similarly to Gala Sarisse, Laranoa is not gated by HP thresholds or afflictions. If she is able to charge her primary attack skill, her DPS will remain steady.

Bow users are easily pressured when faced with mobs of enemies, receiving a damage reduction when in close quarters. Enemies will rarely line up for Vivid Volleys, and ignoring lesser enemies might result in lost combo stacks.

While 20-hit combos are easily racked up from range, a Crit Damage multiplier means little without a means to consistently score Critical hits.

Pair 1: Both Bow-specific picks cover all aspects of offense.