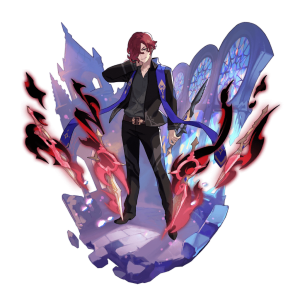 Nevin debuts alongside Pinon as apostles of the church bound by their sigils. After an unholy amount of time or given certain conditions, their handicaps are released and fully powered forms are let loose. Unfortunately for Nevin, the odds are largely stacked against him. In attempting to pose as a support/DPS hybrid, Nevin ultimately struggles to succeed as either. Despite his interesting kit concept, longtime roster juggernauts like Bellina, Vice, Patia, and Gala Cleo are simply more effective with less bells and whistles.

Nevin’s zone is fairly large and offers both a potent 25% STR buff and 20% Light damage reduction when unlocked. 3000 SP is cheap enough to warrant close to 100% uptime.

300 seconds is an absolute eternity, essentially requiring that Nevin run with Ramiel. However, doing so precludes him from power picks like Gala Cat Sith or Azazel.

Puns aside, there’s simply no competing with Vice or Bellina damage-wise. From a support perspective, Gala Cleo and Patia stand as titanic competition. Without absolutely insane DPS or utility like Dispel, Nevin was simply dead on arrival.

The Plaguebringer is preferred over The Fires of Hate since Revelation Swords cost HP to use.