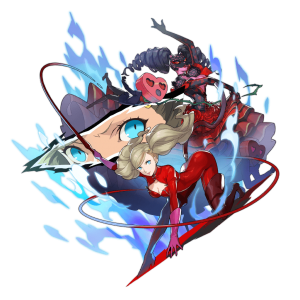 Panther accompanies Joker and Mona in their Dragalia debut, wielding both a whip (Lance) and a gun. In contrast to her role in Persona, Dragalia Panther enjoys consistent, high baseline damage on both her standard attacks and Force Strike. Panther’s modified Force Strike turns her into a part-time rapid-fire Manacaster, dealing increased damage to Overdrive gauges. When combined with Dispel and Scorchrend, Panther’s kit is highly reminiscent of Gala Leonidas and is a strong Legend Volk pick for the same reasons.

Most of Skill 2’s utility requires Carmen to be active, and given its considerable SP cost, using Feel the Heat otherwise yields far less impressive results.

Arctos is a high-reward pick that can lead to some beefy numbers.

TCC may be swapped with Burning Punisher picks, while Chariot Drift can be replaced with STR Doublebuff picks like Sisters of the Anvil or First-Rate Hospitality.