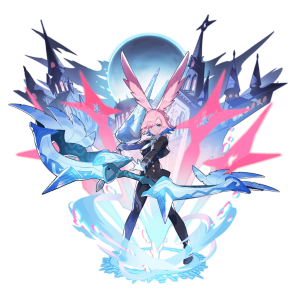 Pinon debuts alongside Nevin as apostles of the church bound by their sigils. After an unholy amount of time or given certain conditions, their handicaps are released and fully powered forms are let loose. Pinon’s special Sigil Released shots are powerful and offer considerable sustain alongside Energy support. After some Force Strike spam to unlock ASAP, Energized Sanctus Arrow and lifesteal shots offer considerable staying power.

Although her concept is fresh and intriguing, Pinon requires extensive setup just to catch up to top tier Water adventurers. A quick glance at the Water roster reveals a handful of lower maintenance powerhouses.

Upon unlocking, Pinon gains special shots after a successful Combo 5 sequence. If left unchecked, these offer powerful sustained damage and allow Pinon to build up to full Energy. Sanctus Arrow should be generally reserved specifically for when fully Energized.

Pinon’s special attacks can only be used after a Combo 5, but she can reach this state quicker than most.

Pinon must bide her time before she can access her full kit. Until then, she’s relegated to spamming Force Strikes and making herself a liability. Several other Water adventurers sport similar power right out the gate, making Pinon hard to justify in endgame content.

Nimis is a close second for similar reasons and synergizes with Inspiration from allies.

Vodyanoy is an accessible STR pick that gets the job done.