Both Fiend Crush and Critter Slayer have strong supporting effects, respectively inflicting Strength Down and Stun. 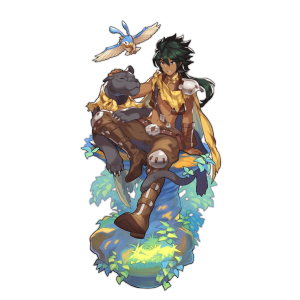 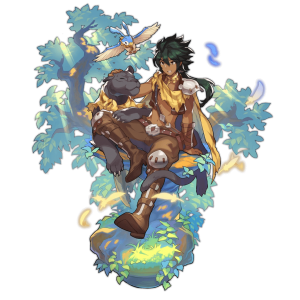 Rawn is a Light Bow user who boasts poison resistance and a kit focused around Stun and Force Strikes. His first ability, Fiend Crush, deals line damage and inflicts a strength debuff, providing good utility to the team. Critter Slayer is a decently fast charging second skill that stuns its target, allowing Rawn to exploit his Stun Punisher ability. His Striker’s Strength ability allows him to gain a stacking buff every time he slays an enemy with a force strike, making Rawn ideal for wave content like IO.

Bow Force Strikes are the worst in the game, meaning it will be difficult to charge his Striker’s Strength ability.

Rawn Struggles when bosses are either alone, or immune to his stuns. Without Strikers Strength and Stunned Punisher, his damage is poor, and his utility drops off sharply.

Thunderbow: The Light IO 5★ is the best Light Bow in the game, but is expensive and overkill for current content.

Heaven’s Bouquet: A Void bow designed for use in Obsidian Golem, this allows Rawn to have consistent damage output there, but it’s a good pick elsewhere.

Holy Bow: A budget choice that works for most content.

Forrest Bonds is the best Bow print in the game, and Rawn’s top choice. Other good picks include Resounding Rendition, Stellar Show, and Heralds of Hinomoto.

4★ good choices include Fresh Perspective, Stand Together, and The Warrioresses.