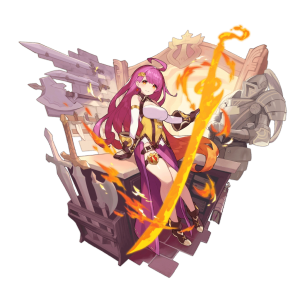 Rena is a unique take on the typical hyper-offensive nature of Blade users. Despite longtime favorite Mikoto retaining his DPS throne, Rena is not without merit. Alongside Fleur, Rena has the rare ability to immediately charge her primary Skill using her secondary Skill. Rena’s lack of consistent Crit Rate is offset by her ridiculously high Crit Damage buff, and she sports potent Abilities that provide passive sustain.

Due to the nature of Brazier Boosts’s resets, Skill Shifts will generally be a cycle of starting with Phase I, followed by Phase II and III in rapid succession.

Just like with Fleur, a rapid Skill Shift reset helps avoid timing out before reaching Phase III. If managed properly, the resultant double-casts are great burst tools against bosses.

With both DEF and HP regen passively applied during regular combat, Rena is nigh unkillable save for heavy burst damage. Her passive healing is even more pronounced when running with her sister Ramona who acts as a pseudo-medic by consistently supplying Defense buffs.

A large part of Roaring Furnace involves an enemy’s Burn susceptibility or lack thereof. Luckily, most Wind bosses are in fact Burn-able, including High Midgardsormr. That being said, a fair chunk of Rena’s damage will rely on a coin flip.

Rena only gains her Crit Rate buff after charging Roaring Furnace twice. Putting her enhanced Crit Damage to use will prove difficult with a mere temporary 10% buff to Crit Rate. While Rena suffers from consistency issues, Mikoto enjoys up to an 18% passive Crit Rate boost.

Generally speaking in flame, the Agito weapon is superior to the HDT2 weapon, though in some niche cases you may prefer the HDT2 weapon thanks to the active skills damage and iFrame potential.

The Chimera Tech weapon is what you should start with if you seek to enter into endgame content.

Pair 1: Assumes the enemy is consistently Burned. Slot 2 can be replaced by any %STR pick, such as Bonds Between Worlds or Crystalian Envoy.

Pair 2: Best suited for content with waves of enemies.