Although he becomes nigh-unkillable with Hildegarde support, Ryozen simply suffers from a lack of damage output. Even with an unparalleled ability to survive many situations, timing out becomes an issue with slower damage-dealers. Overdrive Punisher, while invaluable, is also less than optimal on a Lance, which has medium Overdrive DPS. 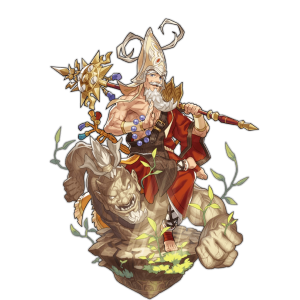 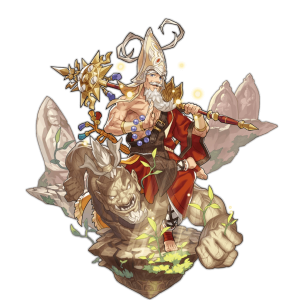 Among the 4★ launch units in Dragalia Lost is Ryozen, a Light defensive hero who uses a lance. Despite his rarity and availability, this tank has unparalleled sustain and HP. He carries a teamwide defensive buff in Celestial Citadel, and with healing doublebuff, the boost grants Regen to himself for continuous healing. Although his damage output is limited, Ryozen can anchor his team and provide a solid line between enemies and casters.

Healing Doublebuff gives him independence to heal without support. If Regen healers like Verica and Hildegarde are unavailable, he can still regain some HP.

Light typing is a huge plus defensively, as Light/Dark matchups always favor the player. Ryozen effectively has no elemental weaknesses, and he gets bonus healing from Hildegarde.

Curse immunity is relevant against Shadow enemies, which also happen to be the favorable matchup for Light types.

Ryozen lacks Buff Time boosts, so supports like Elisanne and Aeleen surpass him in buff uptime and support capabilities.

Jeanne D’Arc is ideal with her hefty 40-60% HP boost, and brings an additional defensive buff for extending Ryozen's Regen effect even further.

Lindworm can improve outbound damage if Ryozen finds himself surviving much longer than teammates.

Halloween Silke provides a compromise, with her split stat boost and an attack that debuffs enemies’ Strength.

Budget Options: Jack-o-Lance is perfect on Ryozen, but for those who missed the Trick or Treasure event, the element-neutral Ironside Lance and Gae Bolg are still good options.

How to Flee Properly

Lord of the Skies

Overdrive Punisher: Lord of the Skies