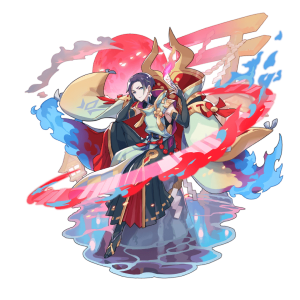 In contrast to Wands’ typical spell-slinging nature, Seimei can be played one of two different ways. The first is shikigami-focused, largely ignoring Skill usage and constantly channeling Force Strikes to sustain a level two shikigami. The second is a more supportive role, leaning more towards burst and utility. Most notably, his shared skill is easy to use and comes loaded with unconditional debuffs. If nothing else, his unique Co-ability is a powerful teambuilding option for those who missed Megaman’s event.

As a Wand user without a Skill Damage Co-ability, it’s safe to assume that CyGames intended for Seimei’s kit to focus on maintaining shikigami uptime. A combination of Gala Leonidas and Laxi's kits, both Seimei and his bird summon are content to stand in place and consistently chip away at bosses

In order to reap the benefits of a leveled up shikigami with either playstyle, the summon must consistently hit the target. This may prove difficult with mobile / disappearing bosses like Volk. This also makes Skill 2 dispel far less accessible.

Seimei cannot single handedly enable Scorchrent Punisher loadouts, as his Scorchrend is tied to his Skill 2.

Gala Mars and his raw STR are a close second.

The Cutie Competition for Scorchrent Punisher is an option if running alongside Gala Leonidas.