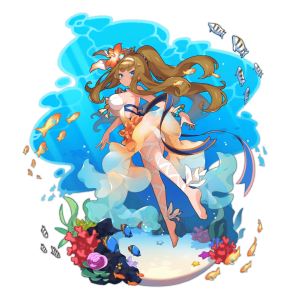 Leaving her timid disposition behind, Summer Julietta makes a bold statement in the A Splash of Adventure showcase. Though classified as an Attack unit, Julietta is more than happy to support her team through Bog applications and Skill Shifts. Similar to Ramona, Julietta avoids damage lulls with Primed Strength, which covers for downtime between Skill Shifts and gives her more power as a standalone DPS Adventurer.

As previously mentioned, Primed Strength and Skill Shifts ensure that Julietta is seldom sitting at her base STR level, allowing her to output steady damage throughout the fight.

Endgame content like High Brunhilda’s Trial and higher levels of the Mercurial Gauntlet do not allow Julietta to utilize Bog’s potency and invalidate part of her kit.

Like many Axe wielders, Julietta has only dodge rolling to get herself out of tight situations.

Pair 1: Flower in the Fray is replaced with %STR like Crystallian Envoy or Bonds Between Worlds for stronger neutral damage because Julietta only has one attack Skill.