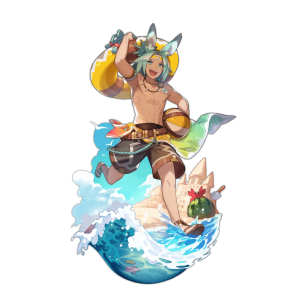 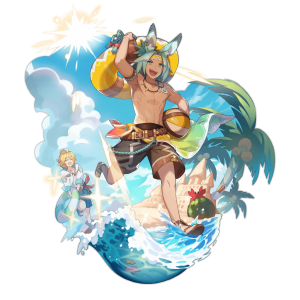 At long last, Luca receives his first alt, forsaking his Bow for a heavy-hitting Axe. The polar opposite of Julietta, Summer Luca favors raw damage over survivability and earns his spot on the higher end of the Light DPS roster. Although his kit is rather plain, Luca’s low SP costs are complemented by an increased attack rate and a reliable onslaught of damage.

Axes are generally characterized by their sluggish swings and equally slow SP gains. Luca breaks the mold by constantly amplifying his attack rate with his low SP cost Skill 2.

While bannermate Cleo is gated by afflictions, Luca has no such reservations and outputs stable damage throughout all content.

Luca provides zero utility of any kind for his team, as his lackluster Energy kit benefits only himself.

Completely unlike Julietta, Luca has no form of damage mitigation outside of his Co-Ability, which makes keeping 70% HP a challenge without team support. Essentially a glass cannon, his low resilience will show during longer content.

Cupid is coveted for his immense 60% raw STR boost and powerful active Skill.

Lindworm is a capable yet accessible pure Strength alternative to the slew of 5★ Light Dragons.