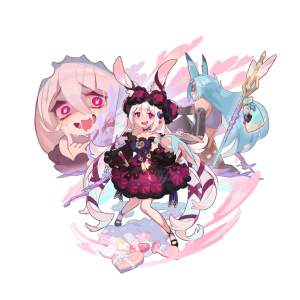 Valentine’s Day has upped Chelsea’s enthusiasm and with Legend Ciella’s release, she’s enjoying a surge in usage. As far as unique gauges and ramping buffs go, Chelsea’s kit is comparable to the apostles’ Locked Sigil effect. Upon filling her skill gauge to the max, Chelsea enjoys a smorgasbord of buffs to both damage and survivability.

Where usual Poison setups fall flat, Chelsea’s consistent Stormlash is able to shine bright. Combined with three dispel-capable force strikes per Skill 2 cast, Chelsea is a welcome sight for players who aren’t afraid to get burned.

When burning herself with Skill 1, she activates her dispel force strikes, increased attack rate, and co-ability shield. Additionally, filling her romance gauge grants numerous self-buffs, such as skill damage and HP/DEF. Chelsea is perhaps the only adventurer not to feature innate immunity to at least one affliction, as she eventually scales up to complete immunity.

Inflicting a self-Burn isn’t exactly conducive to survival, and having to fill a five-charge gauge while cycling a Skill Shift means that Chelsea is much weaker out of the gate.

Gala Reborn Zephyr is a close second and offers higher damage while shapeshifted,