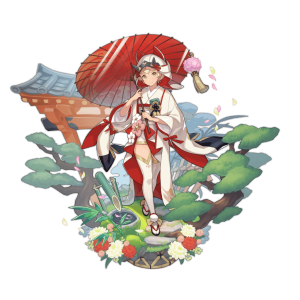 Wedding Aoi steals hearts as the co-star of the Wedding Belles showcase. Aoi’s kit shies away from a more traditional Crit focus, instead going all in on Sleep. Also unlike the usual Dagger users, Aoi grants measures of offensive support through both teamwide heals and STR buffs. Sadly overreliance on Sleep greatly diminishes her potential, as Sleep-immune targets like High Mercury invalidate much of her kit.

Similar to her bannermate Elisanne, Aoi fills a supportive role by acting as a secondary healer and providing a substantial boost to her team’s DPS.

Unlike Lin You, Aoi’s kit revolves entirely around inflicting Sleep. Against resistant enemies, Aoi quickly falls behind other Wind DPS characters and loses many of her supportive capabilities.

Zephyr is the clear choice by granting 40/60% STR for a consistent, raw DPS boost.

Yulong is a strong offensive option for participants of the Echoes of Antiquity event.

Resounding Rendition and Flash of Genius make up the general setup since Daggers can easily maintain high combo counts.

In the event that combos can't be maintained, possible replacements for Slot 2 include: