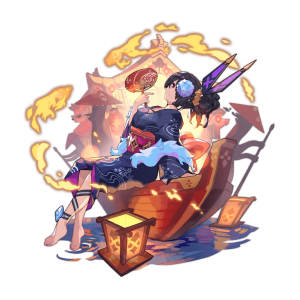 Yukata Cassandra mixes up the Flame healer game with her offensive support focus. Although she still packs two healing skills, Cassandra forgoes utility in favor of boosting allied damage. While her personal damage isn't too high, stacking STR enables Fluorescent Fish to tack on extra damage to her team's attacks. Both burst and regen healing make her a candidate for high pressure content like Volk, although Halloween Lowen’s Sleep immunity and robust buffs offer fierce competition.

Although she’s no Heinwald, Cassandra outputs marginally more DPS than Halloween Lowen. Fluorescent Fish is a neat way to boost her allies’ damage, with occasional STR spikes when Skill 2 fills.

Failing to stay in perfect health will remove a significant chunk of STR, thus reducing the effectiveness of Fluorescent Fish.

Gala Mars goes all in on Cassandra’s damage potential with Fluorescent Fish.

High Brunhilda offers a balanced approach with both STR and HP.

Cerberus grants the most raw STR and is favored over the likes of Apollo since Cassandra's personal damage doesn't matter too much.

While Cassandra may choose to lean towards recovery or personal STR, either style requires Skill Haste.

Goldfish of the Hereafter (Upgrade 1)

Goldfish of the Hereafter (Upgrade 2)

Goldfish of the Hereafter (Upgrade 3)