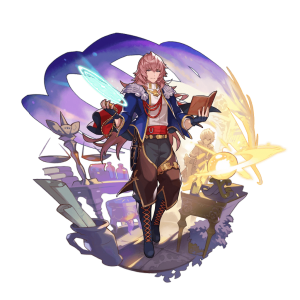 Yurius offers Water a ranged Adventurer who also has a Dragon Drive, a unique combination. He's fairly strong, but he just doesn't quite get there compared to Hunter Sarisse. He's still viable and a great choice for HBH, especially since he enables Frostbite Punisher for his team.

Being ranged makes Yurius well suited to HBH as he won't suffer nearly as much downtime, and he can still let his team enjoy the benefits of Frostbite punisher.

Weak outside of Drive

While not quite as terrible as Tiki when not in drive, Yurius needs to spend as much time in Drive as possible or his DPS suffers greatly.

Without maintaining Frostbite on the boss, Yurius' skills lose a lot of their oomph. He also has to go back to human form to put it back up, which hurts him as he's much rather stay in drive form.

As he uses a Drive, Yurius mostly just cares about what the Dragon's aura is. Siren helps his nuke based playstyle, as does Gaibhne by letting him spam skills more. Leviathan is the old reliable and unexciting pick.

For now, HDT2 is the best option in water, with the core weapon barely adequate for usage. Often, you'll be best served using an off element weapon if you like the HDT2 option.

Candy Couriers is the standard wand print, while His Clever Brother is perfect for Frostbite punisher setups.