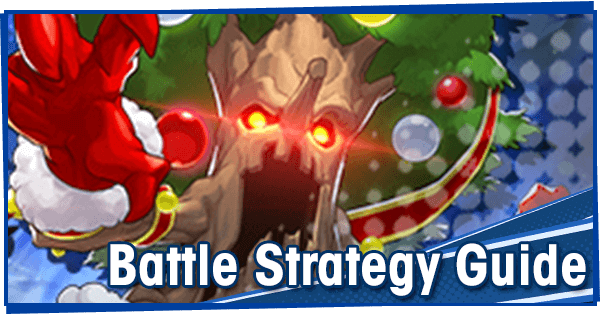 If you're looking for information about rewards and farming efficiency, check out our The Miracle of Dragonyule - Event Guide.

To best prepare for the boss battle, have your strongest team of Water-based adventurers ready. The Boss Battle can be beaten Solo or Co-op. Since Stamina is required for the Challenge Battle, this is the best use of Getherwings for the event.

After completing this quest on Expert, it is possible to unlock a special version of this fight-- Extra Boss Battle: The Brightest Star.

Listed below is each of the Festive Treant’s attacks along with their type of action marker.

This quest costs no Stamina/Getherwings, and won’t disappear until it is cleared. Beating this quest yields huge Astral Ornament rewards, so you’ll want to clear it as much as possible to fully upgrade your Yuletree.

During this fight, the Festive Treant will use all of their regular moves, but will also summon enemies regularly during the fight. A Lily or Xander friend helper is recommended to clear out the weaker foes.

If your team is KO’d or the time runs out, fret not: You’ll earn rewards based on how many waves were cleared. Players without a strong team should at least strive to reach the final wave, even if it can’t be cleared. However, it is quite possible to clear the event with a team comprised of free units!

For this battle, you’ll need at least one powerful Water-attuned Adventurer-- It’s almost necessary to have them at over 2700 Might. The rest of your team should be comprised of either Water units, or your strongest other units. Make sure to take units whose Co-abilities don’t overlap!

Using a high-leveled Xander friend Helper is recommended, as his Skill hits in a wide line, making him perfect for assisting on the deadly Wave 4. Xainfried, Lily and Dragonyule Cleo are some other good choices of friend helper.

If you’re commanding an Axe or a Blade user, just spam the screen with taps to quickly clear this wave. The Slimes should die in one hit and the Gobhealers two, so don't bother using a Skill to clear this wave. Once cleared, start charging a Force Strike in the centre of the map for the next wave!

The two Lizardmen will spawn close to the centre of the wave: Try and hit at least one with a Force Strike when the wave starts. They both have shields that regenerate quickly when destroyed, so you'll likely need to use multiple Force Strikes during this wave.

The Black Hounds can be annoying, as their jump attack can come from off screen and knock you down. Focus on hitting the Lizardmen and dodging the Black Hound attacks.

The Winter Bison might look tough, but they are easy to handle provided you avoid their charge attacks. Try and stand in such a way that both charge onto the same spot, then use a Skill to clear them. Comparatively, the Flame Goblins aren’t a problem. Avoid standing in the centre of the map when wave 4 spawns.

This is the hardest wave in the run, even harder than the boss. All enemies here are pretty tanky, can inflict burn, and otherwise deal heavy damage. If you’re using Xander friend helper, stand on either the northwest or southeast corner, and fire his Skill back towards the centre of the map. Depending on your aim, this should KO or severely dent most of the enemies.

By now you’ll be able to Shapeshift, and doing so is a good idea to clear out the remaining enemies. As a general rule, it’s worth burning whichever Skills you need to in order to quickly and safely clear this wave. If you’ve got all four allies left after this wave, then the rest should be easy. Remember that you can always reset the stage without losing Stamina!

In the final wave, you’re now pitted against two Winter Bison and the Festive Treant. This boss is functionally identical to the one in Extra Boss Battle: The Brightest Star, although with slightly boosted stats. Overall, this is a pretty easy fight, especially compared to wave 4. For a refresher on his attacks, check out the section on the Boss Battle above.

Ignore the Winter Bison and head straight for the Treant. Try and save Skills for invincibility frames, as his Explosion attack is fast, has a wide range and is hard to avoid. All of his dangerous attacks are well-telegraphed, and few hit around him. The Winter Bison will be cleaned up incidentally as you pour damage into the boss.

The Festive Treant can be Frozen, so use of Lily, Celliera, Dragonyule Cleo, Poliahu or Dragonyule Jeanne is a good idea. If you’re using Leviathan, try and time your Skill to match up with the Break phase: This will result in very fast clears.

Clearing the Challenge Battle is not easy, and will require upgraded Adventurers. If you’re getting stuck, try clearing the Boss Battle a few times to level up the Yuletree. Having a higher-level Yuletree makes the fight much easier.