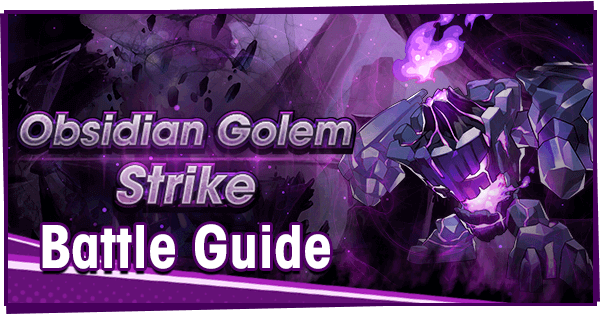 Like many other encounters, Obsidian Golem suits the single healer three damage-dealer compositions well. Most of its attacks can be completely avoided with iframes, making high SP generating characters, such as Sword users, great choices as the lead.

If you’re skirting close to the minimum Might requirement, timing out becomes a possibility due to Obsidian Golem's high HP, which makes this battle crawl to a halt with the Dull affliction. Poison-immune Adventurers (such as Albert, Odetta and Felicia) will obviously have their benefits, but it’s entirely possible to make do with a full damage team and a heal helper once you memorize attack patterns and are confident in iframe dodges.

Obsidian Golem isn’t a challenging fight once you’re familiar with its attack patterns and animations, so most – if not all – Light-attuned characters will be viable assuming they’re around 2500 Might or higher.

This should already be pretty obvious after all the talk about Obsidian Golem’s ability to inflict Dull, but that’s about the only ailment you’re working to resist here – though experienced runners can absolutely clear the fight with any just about any weapon if they can dodge the affliction altogether.

Sadly, it isn’t possible to equip each and every adventurer with an appropriate Dull resist weapon: current options include only a Lance, Sword, Bow, and Axe. But bringing adventurers from outside the Light circle means Blade, Dagger and Wand users can partake without too much worry – just prepare for a strict DPS wall in some cases.

Again, it’s easy to avoid practically ever attack Obsidian Golem puts out with enough practice and high skill availability, so feel free to swap out your own Dull resist weapon for your usual equipment once you’re confident in your ability to avoid each hit.

Water-based healers have no appropriate weapon but can still be brought along as getting their strength reduced by 90% through Dull won’t affect their SP generation or overall healing output. Just don’t expect them to contribute much damage in the long run. Fire healers can bring something like Ashchant, but the gains will be negligible.

Like many other Void Battle encounters, Obsidian Golem follows a fairly strict attack rotation. These differ between regular and overdrive states, so keep an eye on that gauge. The Golem’s Skills aren’t officially named in-game, so you’ll have to learn to read the unique animations from each – which are detailed in the final section.

This attack pattern ends when Obsidian Golem is knocked into the Overdrive state.

This is Obsidian Golem’s attack pattern in Overdrive. This reverts to Standard following Break.

Obsidian Golem always kicks things off with a normal attack – a punch that will happily start you off on the wrong foot with Dull if you’re not careful. Melee adventurers can roll right through the boss to avoid this, but if the golem can’t punch a close target in time (if you’re ranged, for example), it’ll go straight for its wider-reaching slam.

As stated before, practically every attack Obsidian Golem throws at you can be easily avoided with skill dodges or a simple roll. The only purple attack has plenty of easy safe spots, too, to healers shouldn’t need to work too hard here at all.

After opening with either the punch (melee) or Slam (ranged), Obsidian Golem will attack with the barrage-style Ripple Slam, which will usually cast enough red markers to threaten the team. A simple roll or skill should be sufficient enough to dodge the attack here, and most Sword users should be prepped for this after a couple of force strikes.

Then it’s onto a Rolypoly. This is fast, so roll yourself out of the way and head back to the boss to continue with your attacks. It’ll do a single Slam again before pulling back its fist for a time, jump up, and spin to execute its first Axis Earthquake – a relatively thin attack along the boss’s X and Y axis the length of the whole arena. This is easy to position yourself away from ahead of time, but time any skill dodges for the moment the golem takes flight to make sure you’re not hit by the end of the attack.

Obsidian Golem will then typically follow up with the Ripple Slam and another Axis Earthquake before repeating the rotation if you haven’t pushed it into Overdrive status long before then.

You’ll only notice one additional attack when in Overdrive state, but things come at you a little faster now, too. The Golem will usually open with Slam and Axis Earthquake before introducing the scattered purple marker move, Chandelier Crash. These markers fill up most of the arena but have safe spaces along the inter-cardinal directions. It’s worth noting that the second lot of AOEs actually fall first, so use that to your advantage. You might get lucky with a Stun or Paralysis Skill here and negate the ability altogether, but it’s hardly necessary.

After that, it’s business as usual. Expect a Slam followed by the Ripple Slam variant, then his simple punch (behind or roll through), another Chandelier Crash, and Axis Earthquake again. If the Golem is Broken by now, prepare to dodge a roll and another Slam + Ripple Slam combo before the whole thing repeats.

After about two Break cycles, the Golem should be sent packing.

A simple, fast melee jab that inflicts Dull just like any other attack. It’s probably one of the harder attacks to consistently dodge, but you’ll actually only see it two or three times in any given fight. Just roll through the boss at the start if you’re melee and you’ll barely even notice. For ranged, it’s a moot point.

Signaled by Obsidian Golem joining its fists above its head, this is a fairly fast attack that strikes a wide circle in front of the boss. Rolling is usually enough to dodge it, but using a skill might be necessary if you’re stuck in a longer animation.

Pulling a single arm back for what looks like a charged punch, the single red marker might trick you into thinking this is another regular slam – it isn’t. Note the much slower filling frontal AOE and get ready to see a couple more beneath your team as the boss jumps up and spins to come crashing down. You’ll probably want to iframe this one.

A full-length attack across the boss’s X and Y positions, you’ll want to watch for the subtle animation differences here as the red marker only shows up when the golem comes crashing back down.  It’s the same pullback + jump animation seen during Ripple Slam, only there’s no initial circle marker. That’s the tell.

Signaled by a flex and roar animation, Chandelier Crash scatters wide circular purple markers across the arena. These can overlap slightly, but the inter-cardinal positions are generally safe from the crash. The second set drops before the first, so experienced players can weave between them.