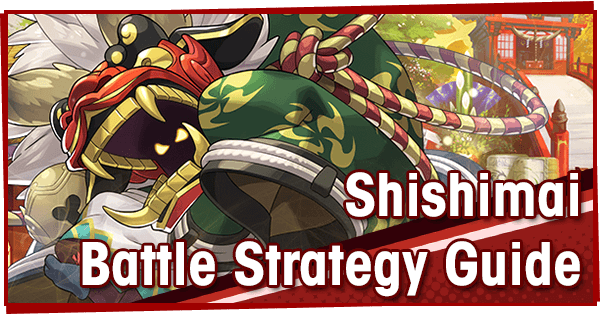 Shishimai is a playful trickster with some annoying attack patterns. Because of the New Year’s gift rewards, most players will be looking to break his back part twice per battle.

Looking for info on the event? Check out our Event Guide!

Ieyasu: If you can get him from the banner, he is among the best choices of unit. Great damage and range make him a clear choice for this raid. Bleed works on Shishimai, so he can output his full damage during the raid.

Botan: She offers very high damage through her Thaumian’s Bane, Lance attacks, and team buff. Unfortunately, her lack of 100% Paralysis Resist makes her riskier, or require a Wyrmprint to cover the weakness.

Sazanka, Orion, Nefaria, Cleo: These are the best unit choices for the raid. All boast +100% Paralysis Resistance, and excellent offensive, defensive or healing capabilities. Sazanka is especially amazing due to her ability to inflict Bleed and Gauge Accelerator passive. If using Nefaria, remember that she can’t blind Shishimai!

Berserker, Kleimann: While these are decent choices, they lack Paralysis immunity which affects their capability to deal damage and survive. Consider them as backup units after those listed above.

Marishiten: The new top dog (or is that boar?) is the clear cut best dragon for this raid. Her +40/60% Strength boost is unparalleled for Shadow. She can even inflict Bleed onto Shishimai!

Juggernaut: His +30/45% Strength Bonus is excellent, making him a great choice (and easier to get than Marishiten). Nothing much else to say here, a great Dragon for this raid.

Silke/Nidhogg/Maritimus: The mixed dragons are also good choices. Silke’s Skill is better than Nidhogg’s, since the latter can’t Blind Shishimai. Nidhogg makes up for it with better stat bonuses, but both are good choices. Maritimus is the worst of the three, but still serviceable.

You’ll want a damage-boosting Wyrmprint on your controlled Adventurer. Valiant Crown, Plunder Pals, Crystalian Envoy, Jewels of the Sun, Resounding Rendition, Heralds of Hinomoto and Flash of Genius are among the strongest Wyrmprint choices.

On your three AI-controlled Adventurers, equip a Shapeshift Prep Wyrmprint. This works since Shapeshift Prep is shared between the entire raid group. When four players have three Adventurers each with 8% Shapeshift Prep, this gives a 96% boost to everyone's Dragon Gauge. Dragon Arcanum is a common farmable 2* Wyrmprint with 5/8%, while Dragon's Nest and King's Countenance are summon-only with 8/10%.

Raid bosses aren't the same as regular bosses-- Although they have a Mode Gauge, they have multiple parts each with their own HP bar. Destroying these parts is not necessary, but it can make certain attacks less dangerous or stop appearing. Damaging a part will lower Shishimai’s overall health, and destroying one grants Dragon Gauge and incapacitates him for a short period.

When the raid begins, the team should focus on the Gift Basket. Breaking this will allow your team to collect a New Year’s gift. Once destroyed, Shishimai will restore it once, letting you destroy it again.

Try to avoid breaking Shishimai before his Gift Basket can be restored, as he won’t do it while broken, and this risks being unable to kill his basket twice in one raid. I suggest stopping damage completely once his Gift Basket has been destroyed, and waiting until he uses Gift-giving Dance to restore it.

There’s no timed endeavour for defeating Shishimai this time, so the primary objective is to crack those Gift Baskets!

It’s recommended to have your main DPS at over 1200 Strength, and the rest of your team being Dark-attuned damage dealers.

The Shapeshift strategy is the easiest way to clear the Raid. Set your team up with the following for the best chance of success.

Of course, the challenge here is to break those baskets and win the battle. To start, you’ll want to circle around Shishimai, Shapeshift, and start attacking his Gift Basket. He’ll soon be knocked into Overdrive.

Once Shishimai is in Overdrive, he’ll use Swirly Spinny Tops, then start his deadly Dance of the Sunrise attack. This move deals heavy damage in Special difficulty, and has a different pattern than the lower difficulties (The easiest way to avoid it is to stick to his left side). The best way to handle this though, is to demolish his Gift Basket-- this will end his Dance of the Sunrise early!

From there, the fight is fairly easy: Depending on how your squad’s damage is, you might want to stop attacking and wait for his Gift Basket to respawn. If damage is looking low, just push on through.

The final dangerous attack he has is Hanetsuki Hail. When he launches this, try and stick close to the centre of the Arena, as this will let you move between the left and right sides quickly (similar to avoiding Sabnock’s Dark Side attacks). If you take too long to defeat Shishimai, he will get to use Dance of the Sunrise again, which is not good for your squad.

Be careful about causing the boss to Break while he's using Gift-Giving Dance. Changing states always causes the raid boss to cancel whichever move they are using. Therefore, its possible to cancel his Gift-Giving Dance, preventing him from restoring his Gift Basket.

Are we allowed to plug our Discord
well if we are, you should join the white sparrows 2.0 Discord …
Where are the shared skill Tomes
Maybe I’m just an idiot but they don’t appear in any of the Treasure Trade menus…
Question about mana spirals
I took a few months off from DL and came back to find that mana spirals exist. My…
Is it worth crafting 4* core weapons?
I’ve just started the game recently, and got the Smithy to level 4. Should I start…
A very random what if
So hear me out. I just recently saw an anime that was at least partially produced by…
Read More