Should You Summon? Ambitions in Bloom 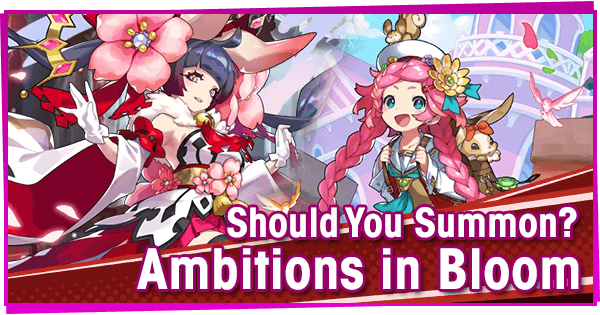 Awwww man, it’s summer time! I don’t want to go back to school! I should be at the beach, eating pineapple and drinking from a coconut!

Why darling, Summer is the perfect time to stay in and study! You really should take a lesson from this banner. Be more ambitious!

Says you! I say summer's all about going outside to party and having fun with friends! Speaking of friends, let's meet our new old friends!

Flame is an already incredibly stacked element with a multitude of powerful Adventurers and Dragons. This banner doesn’t add anything new to the mix, save for the off-element Nurse Aeleen. 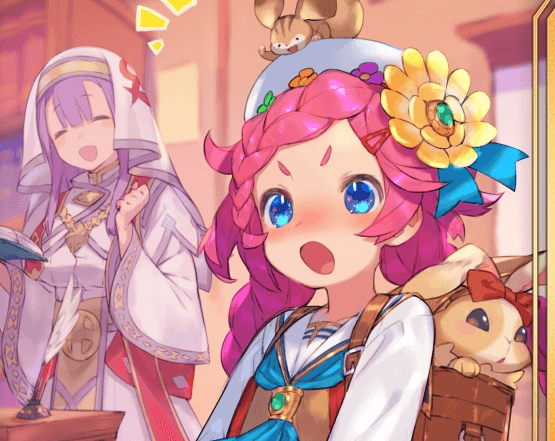 Maribelle has been doing a lot of studying, and it seems to have resulted in her learning how to wield Flame Magic instead of Wind. In most regards, this version of Maribelle is a near identical copy of her Wind Element original. So why not summon for her? A large part of that is that she swapped her 100% Skill prep for 30% Broken Punisher. Now, Broken Punisher is a great ability, but that 100% Skill Prep allowed Maribelle to open up strong and burst down enemies quickly. Without it, she’s somewhat lacking in the initial phase of the fight. For long fights Broken Punisher will prove more powerful if you can break the boss multiple times, but most Wind content at the moment is a breeze.

Additionally, we’ve had so many powerful Flame Adventurers released that Maribelle really lacks for a home. The only people who should pull for her are either new players who have no strong Flame Adventurers with Stun Resistance, or longtime fans. Otherwise, you’re better off not taking one step closer to this tempting banner.

Sharing this banner with Maribelle is longtime favorite Mikoto. He has proven himself time and again as one of the top Flame DPS, and has one of the best kits in the game with his attack speed buffs and focus on Critical hits. Still, Mikoto is a launch Adventurer. He’s been out for a long time, and people have had plenty of opportunities to acquire him. Unless you have missed Mikoto up until now and have no good Flame Adventurers, it would be wise to save your Wyrmite instead of pulling for Mikoto here.

Perhaps the valedictorian of this class, Nurse Aeleen comes in to fulfill the much-needed role of a quality Water Staff. Her first Skill is a potent team-wide heal that comes packaged with two powerful buffs, the first being a Defense buff, and the second being a Strength buff. It takes three heals to cycle through both buffs, but it’s a powerful active. Her S2 can restore health to nearby allies and removes Stun. This one is a bit more situational, as you have to actually be near to your teammates in a similar manner to Odetta’s S2. She also is the first Adventurer to boast United Haste 1, which causes your skill gage to fill faster the more active allies you have.

There is, sadly, one problem with Nurse Aeleen. That is that she has Stun resistance, instead of Burn. While she’s still got a niche in the meta, that also means she competes with Verica, who while off element, has proven to be one of the most potent healers in the game for Void Agni and Flame IO. With that plus the fact that she’s going into the permanent pool, players should probably say Goodnight Everybody! Instead of Hello Nurse.

Serena joins the rather oversaturated stable of Flame Sword Adventurers, and has to compete with the likes of Marth for a place in your roster. Still, she has a few unique qualities, namely her heavy focus on crits. Her S1 increases her Crit rate for 10 seconds, and her passives increase her critical damage multiplier and her critical rate when reaching combo thresholds. Still, they have a slow build up, and there are a plethora of other options. Unless Euden is your only Flame Sword, you should probably pass on summoning just for Serena.

Maaaaan. Studying is SO BORING. I want to get out and play! Hey, that new dragon looks fun! I can really dig the Cherry Blossoms. Because that means cherry season, yum!

The new dragon is a niche pick, and we’ve seen Ifrit often enough that you shouldn’t summon just to target him.

Continuing in the recent line of alternative DPS dragons, the Cherry Blossom Dragon brings a massive boost to Skill Damage to help those Skill-based Adventurers. Whether or not she’s the right choice for your lead depends on some simple calculations. Once an Adventurer gets 60% or more of their damage from Skills, she becomes superior to using Agni or Cerberus. Looking at the damage calcs for Flame attuned adventurers, that means that Konohana is optimal for...no one.

As a 4★ Strength Dragon, Ifrit is a solid budget choice. If you happen to get a copy of him, he’s easy enough to unbind using the Void Battles Shop. As such, it isn’t wise to break the bank summoning for a dragon you can easily MUB through other means.

Basically, math is like, super boring. But you've got the same chance to get Mikoto as you do Maribelle or Konohana! So, don't pull if you don't need one of those.

Should You Summon? No.

While Ambitions in Bloom offers some interesting alts and a new dragon to play with, it doesn’t actually offer much in the way of additional power for players to wield. In fact, the free character, Xuan Zang, is perfectly adequate at clearing High Midgardsormr's Trial, which is the hardest Wind content available at the moment. As such, you’re best off hitting the books and studying up for the next banner instead of going all in on this one.