Should You Summon? A Crescendo of Courage 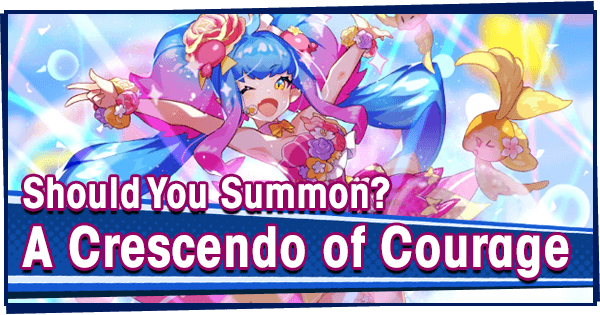 ♪♫ SHOT THROUGH THE HEART! And you’re to blame, Cleo you give alts, a bad name. ♪♫

Well, not actually. Cleo is indeed one of the better bow units released, and certainly the best of the plethora of Light Bows available. She has also, apparently, been cribbing notes from Gala Sarisse. Still, that’s a solid set up, with an S1 that gets better with more buffs, and a S2 that gives a great many buffs for a 10 second window. Instead of Buff Time, Cleo focuses more on Damage with Paralysis Punisher and Paralysis = Skill Haste 10%.

So, is Cleo worth summoning for? I’m going to have to caution against it, for several reasons. First, the Anniversary is a month out, and there certain to be a plethora of goodies available then you want to save resources for. Second, Cleo does not break any new ground for Light DPS or Support. Her kit is good, make no mistake, but it’s not stellar, and there a number of older units like Odetta and Alfonse who outshine S!Cleo that you can use instead. And of course, there is the small matter of us having no idea how valuable Paralysis Punisher will be in future. Cleo’s whole kit hinges on futures bosses like High Zodiark being susceptible, and while I’m fairly confident he will be, I can’t promise that and I hesitate to summon based on speculation.

So, unless chains of love have a hold on you, hold off on summoning for Summer Cleo at this time.

♪♫ Well I’m, hot blooded, check it and see, I got a fever of a hundred and three. Come on Verica, can you do more than heal? ‘Cause I’m hot blooded, hot blooded! ♪♫

Ever more, the Dragalia Lost meta is centered on high burst damage and runs where players avoid damage to the maximum, allowing bosses to be quickly dispatched without the need for a healer. This is, frankly, terrible news for Vericas of all stripes, as she cannot do anything but heal. This version of Verica is shadow attuned instead of flame attuned, but she’s just as heal focused, with her entire kit revolving around pushing out as much Heals Per Second as possible. Summer Verica’s first ability is roughly identical to her originals, providing a Heal Over Time effect and removing blindness. Her second though doesn’t fill through skill damage, but simply does so over time, then allows allies to recover 5% of the damage they deal for 30 seconds. That’s powerful, but again, it’s only recovery focused, and the meta has shifted from this.

While the Blindness kit is refreshing, we know that High Jupiter calls for Paralysis cleansing and resistance (though it’s hardly required) and S!Verica’s abilities do nothing for that. The rest of her kit is all recovery potency all the time, which does make her a super powerful healer, but doesn’t provide anything else.

So should you make a secret rendezvous with Summer Verica? Sadly, our fevers will have to find another balm, because she’s just not worth pulling for at this time.

♪♫ Guess who just got back today! That wild-eyed sylvans that has been away! Haven't changed that much to say! But man, I still think that Luca’s crazy. ♪♫

At last! Luca gets his much deserved alt! But, will he stick the landing? He goes in, and...IT’S GOOOOOOD!

In all seriousness, Luca may be the best unit to summon for on this banner. While he’s not as powerful as S!Cleo, he is far easier to get, and the numbers he can put up are not far below her own. S!Luca’s biggest problem is that his kit is very selfish. While he provides himself with a good amount of energy and can buff his own attack rate, he does nothing for his team. Still, his S1 is a solid damage ability and an attack rate buff is very, very strong, especially when it also gives energy. S!Luca would really appriciate being paired with other energy providing teammates, but he can still be a force to be reckoned with even if he’s your only energy user.

The rest of his kit is very solid, with Curse Res, Extra Energy (again, only for Luca) and HP Strength Conditions. All in all, I do recommend you summon for S!Luca, if only to round out your Light Stable with a solid DPS choice. Because this Luca is red hot! I mean STEAMIN’.

♪♫ I’m walking on sunshine, WHOA-O! And I feel good!♪♫

Fleur is an acceptable pick up, being a decent Light Dagger. She combos well with S!Cleo thanks to their similar Paralysis inclined kits, but is otherwise somewhat unremarkable. I might not summon specifically for her, but she’s a good choice for this Event if you pick her up.

About the Pull Rates

!This is not a Limited Banner! Adventurers and dragons have been added to the permanent pool.

Ok, actually Siren hasn’t been gone at all, but still, she’s back and she’s light! So is she as good as her Water Alternative? No. But she’s alright. Honestly, her skill set is sort of hard to evaluate. Having one Siren user on your team in Co-Op could dramatically increase your dragon time, as well as provide you with a powerful Strength Buffs and Energy. She’s certainly the first dragon that can user her skill multiple times, and it is a good one.

But you also shouldn’t stack them on a team. Two Siren’s might be OK, but three is definitely right out. Ultimately, I’ll give this one a definite maybe. If you already have a MUB Cupid or Takemikazuchi, probably pass, but otherwise you could do worse in your dragon choices.

Unicorn sucks. Don’t summon for her.

Purely from a content clearing perspective, this banner is an easy pass. None of these units are limited, and unless you your mind’s are aching, the earth is shaking, and one of these ladies shook you all night long, save your wyrmite to rock another night, and party every day.