Should You Summon: Dragons VS Valentines 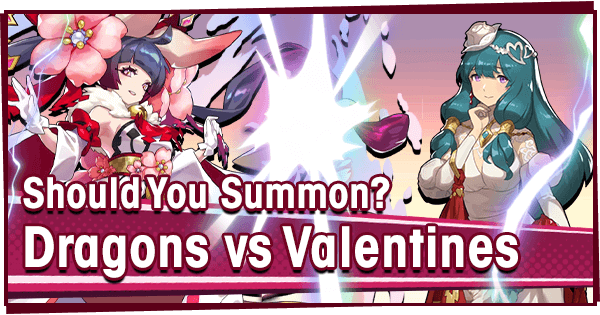 Step right up, Ladies and Gentlemen, for the fight of the century! In the red corner, we have the Valentines Rerun banner! They're strutting their stuff in their valentines finest, and they're only here for a limited time! And in the blue corner, we have the Dragon Special 6! There's no adventures on this one folks, just pure draconic goodness! But which of them will win in a fight for your wyrmite? Fighters to your corners, and BEGIN!

It looks like the Valentines are swinging first folks! A hard right hook from Valentines Hildegard! She's coming in with energy and more heals than you can shake a stick at! This will be a banner showdown to remember, folks!

Once, Valentines Hildegard was a highly valued unit that could really help teams clear High Midgardsormr in new and exciting ways. Now, however, V!Hildegard (and High Midgardsormr in general) has fallen by the wayside in desirability. That's not to say she's a bad Adventurer, far from it. She's certainly the most "meta" of the flame healers around at the moment. The problem is that healers are no longer the best units to bring to most content, and that most people are no longer doing High Midgardsormr with traditional setups. If you are still looking to farm HMS you could do far worse for a healer, but most of the time people will expect you to bring hard hitters like Marth, G!Mym, or Mikoto and blitz down HMS while only taking damage from the initial burst. And if you did want to bring a healer, Verica is still an easily obtainable healer that is far easier to get and isn’t limited.

As such, V!Hilde scores no points for her banner as a reason to pull aside from being a limited time collectable unit with a small niche.

Ooo, and Hildegard goes down, taking a blow from the ever changing meta and struggling to recover! Up next is Naveed! He's the ringer in this one folks, stepping into this banner with his love and passion!

Time has not been kind to Naveed. He started out as a somewhat weak unit that did best in marathon challenges, and had his time to shine in a few Master Event gauntlets. However, since then we’ve seen a slew of incredibly powerful Flame Adventurer releases that have continually eclipsed the desert swordsman. From the limited Marth and G!Mym to the non-limited Ramona, Naveed simply can’t keep up, even in the longest of content where he can stack his Radiant Baubles to maximum.

He was barely worth pulling for in his initial run, and he’s certainly not worth spending resources to get now. Don’t pull for Naveed on this banner.

The Valentine's banner is on the ropes folks, but they're not out yet! They have a dragon of their own! Prometheus is unchained and ready to rumble!

When he was released, Prometheus was a niche dragon that could help some adventurers survive HMS initial blast and be viable in that fight. Now, there are a myriad of other ways to accomplish this through much easier to obtain wymprints or through HP gems. Prometheus is also completely outclassed in DPS by several new dragons, one of which is featured on the Dragon banner, and even two older ones.

What little reason we had to pull for Prometheus is gone. He's nothing more than a novelty dragon now, outshone by old and new released alike.  Don't pull for him on this banner.

It looks like the 5★ Valentines units failed to live up to the hype this time around. It's up to their 3 and 4★ banner mates to give the last huzzah!

Yue is a non-limited unit, and is not very good, so we're not going to talk about her. Phoenix is also non-limited, but is very strong. However, you're better off getting a Phoenix elsewhere.

V!Ezelith and Orion are also bad. But we'll talk a little about them. Essentially, Ezelith is bad in all her forms because she lacks punch, but this form is really outshone because of G!Sarisse who is a far, far better bow unit. There's really no reason to ever bring her over a plethora of other units, from the excellent Vanessa 4★ to the decent enough Aoi 3★, V!Ezelith is totally outclassed. There are worse units you can take, though. Like Orion. V!Orion is actively bad. He's got a bad resist, a bad kit, and is actually the worst performing Flame DPS unit, even when you're just looking at 3★ units.

In the end, unless you're a collector, there is no reason to pull for any units on this banner, be they dragon or adventurer, limited or no. Save your wyrmite.

The dragons burst into the ring, with Konohana Sakuya swinging hard! A left, a right, a tail swipe! Wait, is that move legal? WHO CARES! FIGHT ON!

When she first arrived, Konohana Sakuya was an interesting dragon alternative for Flame Adventurers but was outshone by other options. Now, however, after a timely buff, she’s pretty great. From being only marginally better than Prometheus, Konohana is now often the top dragon of choice for Flame Adventures, beating out longtime fan favorite Cerberus and only really facing stiff competition from Arctos in niche situations.

She’s a great dragon, an asset to any stable. Yes, pulling for Konohana Sakuya is a good move.

What's this? Shinobi has popped up behind the Valentines banner! "Nothing Personal, Kid" he says, but that move has laid out Prometheus in one blow!

Originally, Shinobi just had the claim of being the best non-limited Shadow dragon. Now, he’s just the best Shadow Dragon in the majority of cases. With his buff, he’s also one of the strongest dragons in the game, pairing up well with all the top Shadow DPS Adventurers and unleashing ninja goodness wherever he goes.

A fantastic dragon, and well worth acquiring. Yes, you should pull for Shinobi.

The last man on the Dragon Banner's team is the weak one I'm afraid. Takemikazuchi rushes in, pressing the Valentine's hard! He's in Overdrive!

Out of all the dragons on the Dragon Special 6, Takemikazuchi is the only one who is not the best dragon in his element. In fact, he’s either second or third, depending on which Adventurer you’re talking about. Still, that’s a good spot to be in. He’s a strong dragon who does best against bosses in Overdrive, which means he can get you the all important Break faster, though he does not punish it very well.

Still, you could do worse then summoning for Takemikazuchi. Summon for him if you lack Light Dragons, or what to try something new.

What a fight folks! The Valentines banner is down for the count, and the Dragons are still standing! Time to declare the winner!

A word on this banners quirks: This banner has a slight rate up compared to normal (4.5% vs 4.0%) but has no featured adventurers. You’re basically just pulling for dragons. Which, since this is the Dragon Banner, makes sense. You have only a .84% chance to pull a 5★ Adventurer, and a combined 3.65% to get a dragon.

Still, these are some of the best dragons around, so the winner in this banner duel should be obvious.

Wait, does anyone else hear that?

BY GOD, THAT’S THE ANNIVERSARY’S MUSIC

AS I LIVE AND BREATH, THAT'S THE ANNIVERSARY STRUTTING OUT INTO THE RING FOLKS! This was a boxing match, but now this is a true three way brawl. The Dragon Banner goes in for a punch, a kick, but it's worn out and can't connect. And is that...MY GOD! THE CHAIR! THE ANNIVERSARY HAS A CHAIR! It's hitting the Dragon banner with the chair! WHAT A MATCH!

FINAL VERDICT: SAVE YOUR WYRMITE

The Anniversary is less than one month away as of today. That event is sure to blow anything we have yet seen out of the water as far as goodies to pull for goes. Save your wyrmite, folks. Neither of these banners can smell what Cygames is Cookin'.