Should you Summon? Dragonyule Defenders 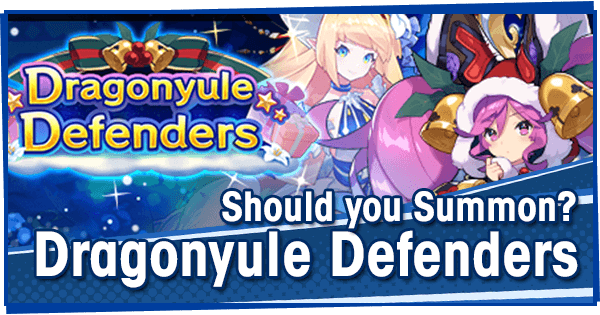 Summary: MAYBE: There is a mix of things here, but things are mostly good, especially in the Dragon department. None of the new Adventurers are bad, but some rely on Energy and most lack Burn Resistance, which is sure to hinder them in the High Brunhilda trial.

If you’ve already got good Water dragons, or are looking for summons to help with High Brunhilda, this isn’t the banner for you. Otherwise, this is a cool seasonal banner with some interesting mechanics!

When a new banner arrives, one question remains: Should you summon? This series of articles is designed to help you decide whether or not summoning on a particular banner is going to be worth it.

I’ll be going over the pros and cons of everything rated up to talk about what makes them good, bad or somewhere in between.

Of course everyone has different priorities and budgets, so take everything said here with a grain of salt. The analysis here might not apply to you, or maybe you’re just a huge fan of the new stuff. At the end of the day, only you can decide what’s best!

However, Wyrmite is is a valuable currency for everyone. And once you’ve taken the plunge and summoned, you can’t get it back. So, it’s always a good idea to consider the options before going all-in!

Note: The game will not allow you to use two forms of the same character on a team. Therefore, if you have regular Elisanne, keep in mind you cannot use her at the same time as Halloween Elisanne. This is true of all alts, but more relevant to Dragonyule Xander, since he shares the same element as his regular form.

Thanks to the recent update, everyone is given a free Tenfold Summon Voucher, which can be redeemed for one free set of 10 pulls. Those amongst you with itchy fingers might be tempted to immediately redeem it for some sweet new loot right away!

But wait! I would like to remind everyone that the voucher has no expiry date, meaning it can be saved and used on future banners! I recommend deciding whether or not you are going to summon before thinking about the voucher. If the banner isn’t right for you, just save it for one that is!

Already a popular character, Cleo is the second Adventurer in Dragalia Lost to receive a 5* alternate version! She’s a Water-type Dagger user with skills that work with the new Energy mechanic introduced two weeks ago.

Cleo’s got two attacking skills, the first which has some nice team support as a part of Skill Shift. She has some great passive skills, such as HP 70%  = Strength +13%, arguably among the most coveted effects for damage dealers. Her third passive is easy to trigger with Daggers, and boosts her own energy levels further.

Should you summon for Dragonyule Cleo?

MAYBE. Cleo’s lack of Burn Resistance makes her a subpar choice on endgame content (High Brunhilda trial). Those strictly looking to minmax the game won’t find much use for her. That aside, Cleo is a great unit in her own right, who can dish out a lot of damage. And her outfit is more than enough reason to go for her.

Don’t be fooled, as Nefaria’s coldness is only skin deep-- she’s actually a bringer of gifts! Dragonyule Nefaria is a 4* Water unit who wields a Bow, and is notable for her unique “Gift Delivery”. However, her main role is damage dealer.

Nefaria’s got some great passives, Skill Damage +25% makes up for her lack of a second damaging Skill and she can even freeze based on combo count, an easy feat as Bows build combo quickly. Her 2nd Skill is most interesting, allowing her to grant Energy and a shield to allies with her Force Strikes.

Should you summon for Dragonyule Nefaria?

PROBABLY NOT. Nefaria is a real mixed bag (pun intended, come at me). She’s a respectable damage dealer, but stands out because of her Special Delivery Skill. Although landing Force Strikes with a Bow is much easier than before, it’s still an awkward mechanic with little reward (a 15% HP Shield is too small to block real damage, and Energy is so far underwhelming). Worse yet, it has a SP cost of nearly 9500. Only go for her if you love her novelty factor!

The King has returned, this time wielding a mighty Wand! Dragonyule Xander is a 4* Water Adventurer geared towards damage dealing, but with a touch of support through Monarch’s Boon: a Skill which grants everyone a damage boost and one energy level.

He’s got interesting passive abilities: Skill Haste helps to charge his Monarch’s Boon, while Striker’s Energy gives him the ability to charge energy quickly, provided he has the foes to stack it up.

Should you summon for Dragonyule Xander?

MAYBE. Dragonyule Xander is a fundamentally strong unit, but he’s let down by the long SP charge rate of his Monarch’s Boon. Striker’s energy is also limited by quest, but it makes him a beast in Imperial Onslaught (Just like his regular form!). He’s a mixed bag with more good than bad, but compared to other Water-type damage dealers, fails to stand out compared to others.

This version of Jeanne dons a beautiful dress, and unlike her regular form, is ready to do some damage! She grants +30/45% Strength and +15/20% Critical Rate to Water-attuned adventurers. This is more or less on par with a +40/60% Strength Dragon but the exact comparison depends on the Adventurer/Wyrmprint, as those with Critical Damage bonuses will gain more damage from Jeanne.

Should you summon for Dragonyule Jeanne?

YES! Although Leviathan is still stronger due to his Skill which inflicts Bog, Dragonyule Jeanne is the next best thing for Water-attuned damage dealers. There’s little to say about Dragonyule Jeanne-- a great 5* Water Dragon. However, those looking to clear High Brunhilda may find her lack of a HP-boosting ability makes it hard to survive her opening attack.

Compared to Poli’ahu, this guy is often forgotten by most players. Although he’s been available since release, Vodyanoy hasn’t been featured on a banner yet! He’s a 4* Water Dragon who boosts Strength by 30/45%, making him a great choice for damage-dealers. Overall, he’s a pretty straightforward guy: Strength bonus, no special effects on his Skill.

Should you summon for Vodyanoy?

PROBABLY. Although better 5* Water Dragons exist, Vodyanoy is the best 4* Water Dragon for most Adventurers. People summoning on this banner are probably going for Cleo or Jeanne, but Vodyanoy is an excellent consolation prize and is much easier to unbind than a 5* Dragon.

This 5* Wyrmprint grants two effects, both relating to Critical hits. It boosts Critical Damage by +13/15%, and gives Flurry Devastastion +8/10%, boosting the users Critical Rate but only if they’re Water-attuned. It also has Holiday Cheer +100/150%, which helps when playing the Dragonyule event.

Should you summon for The Prince of Dragonyule?

MAYBE. Well, as much as I don’t think people should ever pull for Wyrmprints, I have to admit that this one is pretty good. And it’s clearly designed to be used alongside the new Cleo and Jeanne! I wouldn’t hunt for his specifically, but if you manage to snag one, keep in mind it’s one of the better Wyrmprints in the game.

The other 5* Wyrmprint, this one is defensively inclined and gives HP 70% = Defense +8/10%, and Healing Doublebuff I/II. Finally, it also grants a +100/150% to Holiday Cheer during the Dragonyule event.

Should you summon for A Wish Upon the Yuletree?

NO. It’s not like the effects of this Wyrmprint are strictly bad, but Adventurers tend to want effects that relate to their primary purpose (damage-dealing, healing, etc). The actual heal you get from Healing Doublebuff is much lower than that of your average heal-over-time Skill. Personally, I think the most useful part of this Wyrmprint is the boost to Holiday Cheer during the event.

Should you summon for Saintly Delivery?

Wow Cygames, this Wyrmprint that grants Wind Resistance is sure bound to be handy for this event with Flame Enemies. Well to be fair, it’s probably rated up for its Stun Resistance +20/25%.

Should you summon for Trove of Knowledge?

NO. And if you get it, enjoy your Eldwater!

This Wyrmprint grants +3/5% to Recovery Potency. All things considered, it’s not bad for a 3* print. And it also gives +50/75% Astral Ornament intake during the Dragonyule Event.

Should you summon for Roast Feast?

NO. I have serious doubts that anyone reads this far. If you do, you’re probably crazy enough to actually unbind this bad boy. If you were around for the Wish to the Winds Halidom event, you’ve already got the Louise’s Hobbies Wyrmprint, which grants a much bigger boost to Recovery Potency. If you somehow manage to summon this unbelievably common print, use it during the event then afterward, I’d recommend you trade it for some sweet sweet Eldwater.

ALEX WHY WON'T YOU COME
@SapphireSea wrote: Summons for GAlex has not been well. I…
G!Alex Team Building Recommendations
@aldwin96 wrote: Hey… so I need help with team building…
This triggers me every day
@timmhenson wrote: Screenshot_20200328-185948_Dragalia939…
Im a tad bit lost (like dragalia LOST)
@ibaesgae wrote: so ive been going through the dragalia…
Another FEH crossover?
@SupaAnimegal wrote: Nintendo Everything –…
Read More