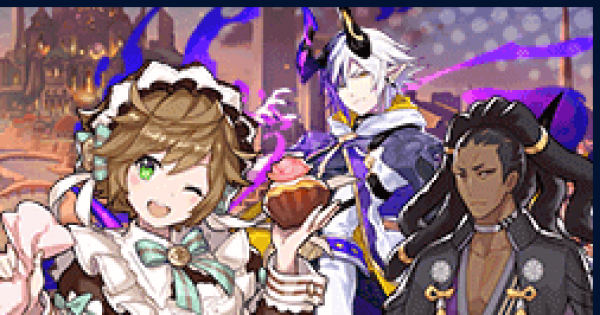 Should You Summon: I <3 Poison

It’s Valentines, and love is in the air! But did Euden bring home any hunky faeries? NO! Only more angsty dragons, a maid, and a samurai! Why do I even put up with these people? Oh well, at least there’s always chocolate.

I'm Addicted to you but I know that you're Toxic

I thought about trying some of Melody’s cooking but I’m pretty sure I’d wind up poisoned with all the mayhem she causes.

Melody trips onto the scene and looks to recapture her place as a top member of the Wind roster. Unlike her old incarnation, Melody’s skills bring not a buff, but a large number of Debuffs for the enemy. Interestingly, her S1 gives a 15% debuff zone, which is just as powerful as Wedding Elisanne’s but is far more spammable, leading to even more uptime. That alone is a pretty spiffy change, but it’s not even the best part of Melody’s kit: She is Wind’s new best poison enabler for  Master High Mercury, as her S2 inflicts Poison.

The obvious point of comparison is to the recently released Joachim, but Melody has a very distinct advantage: As a melee Adventurer, she won’t be forced into running an HP dragon in order to survive in Master High Mercury. Unfortunately, Melody’s co-ability is not the standard axe co-ability, but is instead the same as Halloween Mym’s and offers a mediocre 30% Crit Damage increase. This is frankly a disappointment, as if Melody had possessed a defensive co-ability, teams with her and Kirsty could have run printless, but regardless that isn’t the reality we live in. Melody can and will enable the use of Poison for standard Wind teams.

As for the rest of Melody’s kit, she has both Poisoned Punisher 30% and a Poison = Team Strength 10% passive. These are both fantastic, and really sell Melody as a stellar support and DPS for wind teams. Her personal DPS is also really high, and she can actually replace Victor in Master Mercury as she’s able to dish out numbers superior to his in an optimal environment. Unfortunately since you still need the Master High Mercury print you won’t be able to run a Poisoned Punisher team completely, but she’s still competitive. She could also replace a Wedding Elisanne, but it’s been shown teams rather enjoy the extra healing that she gives so I find that unlikely.

Still, Valentines Melody is a strong contender for your Wind Roster, enables Poison in a myriad of other content, and provies a slew of buffs and debuffs for the team. She’s certainly worth pulling for.

Verdict: Yes. Valentine’s Melody is a strong choice who can deal some impressive damage with even more impressive team support.

Addis might be good with the bow, but his attempts at wooing are coming up a bit short. I said I’d like something to eat as a gift and he gave me carrots. What am I, a rabbit? At least make them into a cake first!

Addis comes at an unfortunate time. Delphi has just received his Mana Spiral and is the unquestioned king of Poison enabling in Shadow because of it. If he’d come a bit earlier or somehow had a mana spiral of his own Addis could have competed with Delphi perhaps, but as it is I forsee that the oracle will continued to be favored amidst Shadow teams that desire an affliction.

Another problem is that like Natalie, Addis functions best running at the razor’s edge of vulnerability with his HP under 30%. Like her, he also lacks any sort of built in recover options to get his HP back up if the team is going to take a big hit, as it will in Mercurial Gauntlet or High Jupiter. This means that while Addis is very powerful, the content where he is actually desired or can perform well is rather limited.

Still, it does have to be said that Addis can put out some monster numbers. His poison is excellent, and his very spamable S1 hits very hard, dealing up to about 1500% damage when he’s really red-lining it. His S2 brings his HP to 20% to allow him to easily turn on his HP conditional passive, and it grants him a shield that can help him survive minor hits. He’s got Poisoned Punisher and HP >30% = 20% STR 10% attack rate passives so he is really able to bring them pain when at low HP.

Again though, having to be at low HP in the first place in fights where you’re guaranteed to be taking big hits is problematic. You can get away with it if you bring Heinwald along, but in most cases it would be easier to just use Delphi, who still puts out better numbers than Valentines Addis can anyway.

Verdict: Maybe. Valentine’s Addis really is strong, but there are better options who are also not as prone to taking dirt naps.

Hildegard is back to sooth my troubled heart, but it’s the chocolate that will give me energy to soldier on!

Unfortunately for Hildegard, the Meta’s heart belongs to another limited time alt, namely that of Halloween Lowen. While Verica is barely clinging to a small nice in the meta, Hidegards of all flavors have been forced out, and especially Valentine’s Hildegard. Energy has proven to be extremely underwhelming, and Hildegard neither puts out enough healing nor provides enough of a boost to teams to be worth taking over Lowen or even Verica. Add to her now weird pseudo-limited status and I have to say there’s no reason to chase here.

Verdict: No. Most healer’s are floundering in this meta, and Valentine’s Hildegard is no exception.

Orion might be a smooth talker, but Ezelith seems like she's smart enough to see through him. I just hope they don't light everything on fire when they have an argument again this year...

As limited alts, these are of interest to collectors, and there is the potential that they could soon receive mana spirals and become much more potent. However, that’s a gamble on the future and one I advise you not to take. Valentines Ezelith is totally outclassed by three Flame Archers (and none of them are very popular in the current meta anyway) and Orion has a baffling Curse resistance that makes him actively bad.

Verdict: No. Neither of these Adventurers have ever been that popular, and the current state of the game has rendered them completely obsolete.

You know, some people say love makes you crazy, but I'm pretty sure crazy makes you crazy. Just look at Durant! I don't know what he's in love with, but he's definitely still nuts!

As a perennially available 4* that doesn’t have much to make him stand out in the crowd, I advise everyone to pass on Durant. While he can put out good numbers, the fact that he is completely reliant on auto attacks and has to be at 100% HP AND reduces his own defenses to almost nothing makes Durant an easy Adventurer to skip.

Verdict: No. While not bad per se, there’s no reason to go out of your way to acquire Durant at this time.

Wow, is this guy really Prometheus’ brother? I mean, they sorta look the same, but he’s twice as broody and has a toxic attitude to go with it. I suppose he needs love more than most, but what’s he doing glooming up my candy day?!

To be blunt, Epimetheus baffles me. He’s a Punisher dragon, sure, and that means he’s got a niche, but he only offers a 70% Boost, which is a far cry from the boosts 2nd Generation Dragon offers. He’s clearly a blast from the past, and one that really lacks a home in the current meta. While he can be used over Fatalis in Poisoned Teams that want to dodge Curse and still Shapeshift, an awful lot of the Shadow roster would rather just use Shinobi in that case, so why go through the trouble and expense of acquiring him and unbinding him? He’s not even got a stellar attack combo, Shinobi is still top dog in that regard too.

He’s even got a really weird disclaimer that he is only pseudo limited. It says that he “might” appear in future showcases, but not that he’s added to the permanent pool like they did with Corsaint Phoenix. So is he limited or not? I don’t know, and honestly that worries me. Personally, I would rather pick up Fatalis, who despite his crippling shortcomings at the very least possess a higher boost that justifies summoning for him and adding him to your roster.

Verdict: No. This baffling throwback doesn’t do anything to make himself stand out and his Shrodinger’s Limited status doesn’t make me think chasing him is wise.

Vayu might not look it, but he's pretty skilled at making Valentine's crafters! He made me some cherry mochi that is just to die for!

Unlike Epimetheus, Vayu has a clear place in the meta. He’s still prefered over 2nd Generation Dragon Garland by specific Adventurers, most especially Victor who wants to be dealing the most Bleed damage possible, but there are other Adventurers who still really appreciate him as well. Skill dragons are an excellent option, and though 1st Generation Dragons are slowly being outmoded, for the time being Vayu is still a solid top tier option.

Verdict: Yes. Vayu continues to be an excellent choice for those looking to maximize their Wind roster.

!!This is a limited banner!! Valentine's Melody and Addis are definitely limited, but the others could appear again. Maybe. This is all very confusing.

Final Verdict: Maybe. Valentines Melody is an excellent pick up, but the rest of the offers are either a mixed bag or not new.

As many of us have depleted our stashes from the barrage of Gala and Limited Colab banners, Valentine’s comes at a tough time. If you don’t have a lot saved up, I wouldn’t worry about it too much, and don’t suggest you chase too hard on this banner. While Valentines Melody is stellar, the other offerings are fair to middlin, and I can’t recommend you chase any of them very hard.