Should you Summon? Eastern Emissaries 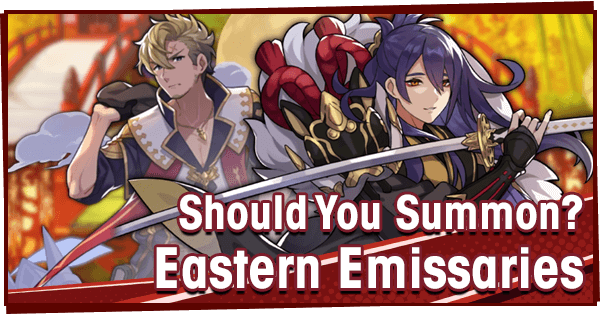 Notte: Happy New- Wait, hold on, that was last time! Well, Euden throws a party every other day, so I guess I just lost track of things! Still, it’s good to have Ieyasu and his attendants back, especially as they’ve become even more relevant than ever! Let's take a look at these Adventures at the Bleed-ing edge of content!

Should You Summon? YES!

A lot has changed since the first time this banner ran, with the Shadow Element receiving several powerful new Adventurers, High Mercury, and of course the release of Void Battles and the removal of Wyrmprints from the summon pool.

What hasn’t changed though is that Bleed is one of the best debuffs in the game, and that these Dragons and Adventurers are some of the most dominant DPS choices around. Many players have found success using the Eastern Emissaries Adventurers off-element or even off-resistance, and Marishiten has been the best Shadow DPS dragon since her release.

Man, I hope Sazanka is here to kick butt and make mochi! But mostly mochi, that stuff is delicious! Hey Curran, you want any mochi? Two mochi please! And one for my friend here, too.

Should You Pull? YES

All three Eastern Emissary Adventurers on this banner have something to offer. While Ieyasu is the obvious goal, a Shadow Axe and Freeze-immune Wind Blade are great characters to get in the interim. Being both limited and of 4* rarity, they’ll be valuable additions to the roster for flexibility with future content. On top of that, Bleeding is an incredibly powerful status-- at least for the moment. Regardless of whether future balancing changes weaken Bleeding, it's another stackable status that's easy to play around.

The weak link here is Curran guest starring from the permanent pool, but even he's a top pick among them and a great pull if you don't have him yet.

Wow, Martishiten brought her boars back with her! I learned my lesson last time though: Her boars are for petting, not eating. Wait, did anyone tell Juggernaut that?

Should You Pull? YES

Marishiten is the real jackpot of this banner, being a 40-60% Strength booster and hands down the top Shadow DPS dragon, even with several new releases to compete with. Her skill also inflicts Bleed, and does so in an AOE that can wipe out an entire wave of foes.

Juggernaut is a good consolation prize, especially when MUB. Offering a 30-45% strength boost, he's actually better than Marishiten if she's not fully unbound herself and he is.

The Verdict: If you're missing anyone but Curran, Yes

This is the first real re-run banner Dragalia Lost has seen, so many people will have already picked up the choice offerings. If you’ve already got Marishiten and most of the Adventurers, you can safely pass. However, if you missed out the first time, this is a great opportunity to pick up some of the most powerful limited summons we’ve yet seen. Curran is the only real dud here, and that's mostly because he shares a banner with a 4★ who is not only competition, but can outperform him. Plus, since he's not in the limited pool, you can take your time acquiring him.