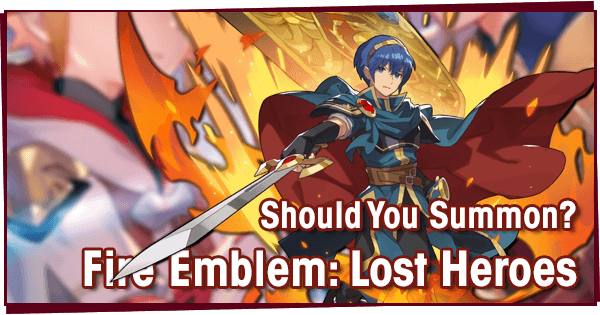 Welcome, summoners! It's that time again, time for our friends from the world of Fire Emblem to return to Alberia! I’m excited to talk about all of them! They’re my very bestest friends! Each of them is special in their own way and-

-aaand you talk to much! Bang, boom! KA-POW! These guys kick ass, so let’s talk about it!

You know, it’s kinda weird to me that Marth’s a king, but follows Euden’s orders. I mean, he’s like a prince, right, so Marth outranks him I think. Plus, I mean, have you seen Marth fight? He’d totally smash Euden.

That’s really mean to your own friends…

Eh, Euden killed me in one timeline. He has it coming.

The first Smash Character in Dragalia.

When he first arrived, Marth was the very best Flame sword in a hotly contested element. Time passed, Spirals came out, and Marth more or less fell off the radar for a while. He was still usable, but the Burn Meta had more or less passed him by. Thank to his re-run, Marth now has a Spiral as well, and the Hero King is back on top!

There’s no way to mince words here: Marth is now the best Flame DPS, bar none, and that’s an achievement in a hotly contested element. His S1 not only gives Marth an incredible degree of self-sustain, but also inflicts Burn, making him perfect for the current meta. His S2 has the bonus damage to burning enemies tacked on now, which makes it even better than it was before. It’s skill shift buffs are nothing to sneeze at, especially the 30% attack rate boost, which is frankly insane.

It should be noted that Marth still fares best in fights like Master High Midgardsormr, due to him getting a substantial boost from Last Boost, which totally fills his skill gage. Notably, this can now trigger twice per quest, but in cases like Expert Volk you are honestly better off not trying for it, as outside of the very beginning of a quest it’s benefit decreases as your teammates won’t be poised to take full advantage of it. Still, it is really potent to give 100% skill prep, and should not be underestimated.

Flurry Devastator continues to offer a nice 13% crit rate, and requires only 10 combo now, which is laughably easy to get to and maintain. Notably, Marth has one of the absolute best Flame Chain Co-abilities, with a 10 combo count increasing strength by 13%. Frankly, that’s so good I’d almost say it’s worth getting Marth even if you plan on sidelining him. Karl does offer a similar version, and though he only goes to 10% the 3% difference isn’t worth blowing a bunch of wyrmite over for most.

In the end, there’s no two ways about it: Hail to the King, baby. Marth is certainly worth getting.

Verdict: Yes. Marth is a top quality choice, and being limited makes pulling here all the sweeter.

Fool, getting hit was my plan the entire time!

Don’t let her cold demeanor fool you, Fjorm is an ice girl once you get to know her!

Notte, that was terrible.

Yeah, but it’s what pays the bills, fluff ball. This is why I’m more popular than you. I know what the people want.

In practice, Fjorm’s kit is simplicity itself: Skill prep, a passive buff that triggers at low HP, Ice Mirror to reflect the attack that got you to low HP, and a newly improved S1 that inflicts Frostbite. You want her to take a nice, big hit, right off the bat, so that she can trigger Last Bravery immediately and use that to get in a ginormous hit with Ice Mirror, then follow that up with Frigid Smash to inflict Frostbite. At that point, your foes should be one foot in the grave anyway, as that combo is enough to kill even Master HBH in under a minute (or even 30 seconds) with four Fjorm’s in the group and the right prints and weapons.

Now, here’s where I come in with a caveat: Fjorm is, right now, the absolute best Adventurer to farm Master High Brunhilda with. However, farming Master High Brunhilda really isn’t at the top of most people’s priority list. Indeed, Expert Volk is mostly where people are going these days to farm up the best Flame Weapons, as Agito weapons are, broadly speaking, superior to the ones you can get through High Dragon Trials. We have no guarantee that Fjorm will be able to cheese Flame Agito as she can Brunhilda (and I would bet wyrmite on Cygames designing the fight specifically so she can’t) and she may end up being a total flop there.

Still, you can’t argue with results, and Fjorm is putting up great ones right this moment. Her kit is overall very strong, and even without the cheese strat she’s decent enough. I’d happily summon for her, but if I already had Marth and Veronica, I’d probably not go too hard after the Ice Princess unless I really wanted to farm out a few dozen HBH runs in a hot minute.

Verdict: Maybe. If you want to farm HBH, Fjorm is unbeatable. Otherwise, she’s not all that special.

I’m glad Veronica is on our side, here, she’s really scary where I come from…

What are you talking about? I saw her playing with LATHNA. She’s scary in any universe. What is it with all these creepy little girls?

Well, at least she has a friend?

Sure, if you want to call a cosmic abomination from beyond the stars a friend.

...That’s a really mean thing to say about Veronica, Notte…

Who says I was talking about just Veronica?

Well, she’s a shadow wand, but she’s not Gleo, so- SWEET MOTHER OF VENUS, she has HOW much burst?

Ehem. Ok, look, here’s the thing. If you have Gleo, Veronica isn’t going to open up any new content to you. If you don’t have Gleo, Veronica is pretty awesome as she can melt both Expert Kai and Master Jupiter in basically no time flat. She’s got great self sustain, and she’s a walking nuclear bomb on a hair trigger. So she’s good.

Buuuutttt she’s also in Shadow. Galas Cleo and Alex are still the supremes of this game, and Shadow has absolute DPS monsters like Bellina and Vice as well. Veronica is good, very good, with an amazing kit that focuses on self sustain in a way that not even Gala Cleo can match. So while it wouldn’t be a mistake to get Veronica, you’re honestly not missing out on all that much if you pass her by either.

Verdict: Maybe. Veronica is excellent, but exists in a world where Light enemies cry themselves to sleep at night anyway.

!This is a limited banner! All featured Adventurers are here only on this banner for a limited time.

Yes if you love Fire Emblem and especially if you want Marth.

This banner has some absolute bangers, and they’re limited. I’d roughly put my priorities as Marth > Veronica > Fjorm if I were pulling, with Marth being several grades higher than either of the ladies just for how incredibly he performs in Volk and Midgardsormr. Getting any of them is absolutely great, but going for a full set might not be wise with a new Gala and more Fire Emblem Banners on the horizon. So go for it, but don’t go too hard, and maybe wait and see what’s coming next.

Should You Summon: Dragonyule Defenders Three: Poems for Thee

Caged Desires, a Persona 5 X Dragalia Lost Collaboration!
Website: Dragalia Lost Dragalia Lost × The…
TAKE YOUR WYRMITE - Persona 5 crossover thoughts?
Contrary to the song, I definitely saw this crossover coming eventually. What I didn’t…
Battle Chart?
Hello everyone! I’m still fairly new to this game, but for the most part, I’ve been…
Always the same Gala Unit showing up!
I play 2 accounts, just played two full months. Already I have 3x G luca on one and 3x…
Asking for Veronica build, and ideal team build
I have a question, i want to use veronica but i don’t know what wymprint i should put…
Read More