Should You Summon? Flames of Reflection 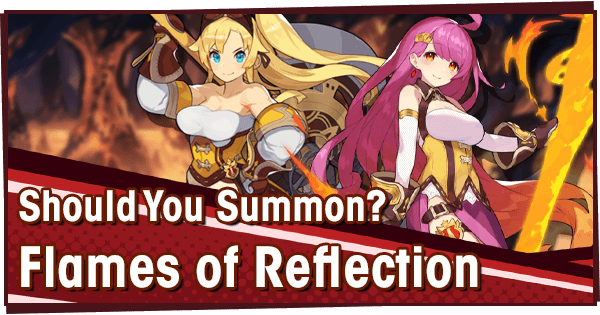 Should You Summon? Flames of Reflection

Whew! Summer’s hot, the forge fires are hotter, but I think Ramona and her sisters are the hottest! Let’s hammer out just what you should look for in this new banner.

The Blacksmith sisters are here to pump *clap* you up!

The Ramona, the middle blacksmith sister, is here to build herself up as the new top Flame DPS, as well as a stellar defensive support Adventurer. Ramona offers a hard-hitting S1 that encourages frantic hammering on your screen to get the most out of it, but can deliver a series of devastating blows if timed properly. Her second Skill is a team wide 25% defensive buff, that also triggers her Strength Doublebuff passive, granting her 13% Strength whenever it is used. Best of all though is her Primed Strength Ability, which increases the Strength of the Adventurer the player is controlling whenever their is charged by 8% for 10 seconds. However, this has a 15-second cooldown, so you can’t frantically switch around your team to give everyone the buff.

With all this going for her, surely Ramona is a flawless piece of master craftsmanship! Unfortunately, this isn’t the case. The first flaw is that she has Sleep resistance, not Stun, which is what is needed for HMS. Fortunately HMS is essentially a loot pinata at this point, and that doesn’t hold her back too much, especially with the right combo of Wyrmprints. Plus, Mercurcial Gauntlet doesn’t really care what resistance you have, and that’s certainly the hardest piece of Wind Content at the moment.

Which brings us to her final flaw, though it is at best a minor one: Ramona has no truly challenging content in which she may shine. Ramona is possibly the strongest Adventurer released to date, with powerful team support and damage, but she has no place where such power is really needed to find success. Plus, this banner isn’t limited, and players may take their time in acquiring Ramona. As such, it is only recommended to pull for Ramona if you either cannot clear level 40 Wind Gauntlet, or if your flame stable lacks powerful Adventurers such as G!Mym, Marth, or Mikoto.

The Eldest of the Blacksmith sisters has to look up to her younger sister Ramona when it comes to battlefield potential, though she’s certainly no slouch herself. Her main draw is her ability to inflict Burn, which is a very useful status in all current Wind quests. She does this via her S1, which can also Skill Shift to increase her Critical Rate and the damage she inflicts to burned enemies.

Sadly the rest of her kit is far less potent. Her Primed ability is Primed Defense, which is not nearly as relevant in the current meta as Primed Strength, especially since it only affects the Adventurer you are controlling. Her Doublebuff is Healing, which while combined with her Primed Defense will keep her at full health, doesn’t do much to support the team or increase her damage.

The biggest challenge Rena faces however are fellow Blade users Mikoto and Aoi. Mikoto blows Rena out of the water in terms of damage, even though his throne as top Flame DPS Adventurer has been usurped by both Marth and now Ramona. He does have a different resistance, but his Stun Res is typically preferred over Sleep resistance in any case. Worst of all though is Aoi. Aoi is an easily available 3★ Adventurer, but she can outperform Rena in the damage department and has Sleep resistance as well. It is worth noting that Rena brings much more utility and is far tankier than either of the other choices, but that’s not typically a very relevant factor to consider.

All in all, Rena isn’t someone worth pulling for at this time, especially if you already posses Mikoto or even Aoi. I would only pull for Rena if you completely lacked any Flame Blade users, you like the character, or if you simply needed to expand your roster of Flame Adventurers due to having few options.

Her big sisters might be smokin’, but Renee is here to help you all cool off! Don't get Bogged down by her flashy siblings, Renee could be the pick of the bunch!

Unlike her Flame-attuned elder siblings, Renee is a Water Dagger Adventurer. Her kit makes her a powerful support Adventurer, with buffs, healing, and most importantly, a fast and reliable source of Bog.

Renee S1 inflicts Bog, and it is this Affliction that makes Renee a solid choice to summon for. Bog increases damage dealt to a foe by 50%, and it works in Mercurial Gauntlet. If you were ever having trouble with a stage, being able to increase your damage by 50% is nothing to sneeze at. The only place that isn’t a factor is in High Brunhilda, and with her Stun Res that means that Renee is clearly not the wisest choice for that particular quest. The rest of Renee’s kit is solid support abilities, with a Healing Double Buff (team) that grants her entire team an HP regent buff whenever a Defense Up Buff is received. This turns Renee’s S2 into a reliable source of teamwide regeneration, which is a useful bonus. Her last ability, Primed Devastation, gives a 6% crit rate buff to the Adventurer you are controlling whenever they use their S1. It’s actually recommended you go ahead and use this on someone else when soloing, as Renee herself is not the most powerful DPS choice.

So should you summon for Renee? Honestly, she’s likely one of the best summoning targets on this banner. Bog is incredibly powerful and has been mostly limited to Dragons, while the healing and Crit buffs that Renee brings are useful on any team. I’d go ahead and summon for Renee if you needed a solid Water support Adventurer for content outside of High Dragons.

The Blacksmith sisters are the famous ones here, but don't forget Karl! He's here too, and he's got tools of his own to take down nasty trolls with!

A quick word on Karl: He’s a solid support character and useful in Void Zephyr as well as the Gauntlet. He’s certainly worth investing in if you need a Flame support, but he’s not stronger than other options like Sinoa to a remarkable degree. Don't summon targeting him on this banner unless you are desperate for a flame Support.

Fun fact! Arctos is the best dragon for napping on, because not only is he soft and fuzzy, but he’s always nice and warm from all that training he does.

As a Flame clone of Long Long, Arctos is useful in exactly the same situations: ones where you have an Adventurer with a crit focused kit. This makes one candidate stand out above all: Mikoto. Mikoto has always had an insanely powerful Crit based kit, and Arctos compliments his playstyle perfectly. While Mikoto is certainly the best choice, Arctos is also a great choice for Marth and G!Sarisse to a lesser extent. He can certainly be used with any DPS Flame Adventurer, but most will get less out of him than those choices.

However, should you pull for Arctos? The answer is pretty simple: Do you have Cerberus or Agni already? If you have a MUB Cerberus or Agni in your stable already, then Arctos is far less appealing. While he’s certainly the best choice for Mikoto, he’s not so far ahead of Cerberus (or even Agni) that he’s worth pulling for. Only pull for Arctos if you already lack the Flame STR dragons, or if you simply must min-max for your favorite cat-loving Blade user.

A solid budget choice. If you somehow lack a copy of Ifrit, pulling to get a single one and then MUBing him through the Void shop is a good strategy for new or F2P players.

Should You Pull? MAYBE

Should you Pull? MAYBE

Should you Summon? Maybe.

This banner brings us some powerful Adventurers and Dragons, but it also comes with a rather poor offering in Rena, who is beaten out by 3★ and long available 5★ choices. While Ramona and Arctos are certainly worth acquiring, there are too many long-available options that are nearly as good as them. Renee, on the other hand, provides a powerful support role that other units simply cannot fill in the same way, and can certainly be worth summoning for, at least in moderation.