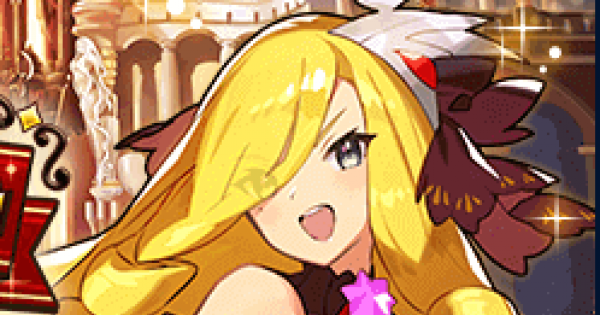 Should You Summon: Gala Chelle Edition

Wow, Chelle is on our side now, but I'm saving my pennies for a Joker and that cuuute kitty! What was his name again?

Paragon's taking a nap, so say hello to my new friend 0rthodox!

Hey guys, what’s up? My name’s 0rthodox. We’ll be taking a look at Gala Chelle today to determine if you should summon her! Without further ado, let’s take a look into Chelle’s Kit.

Chelle’s First skill, Splendido Dominio, deals damages to enemies directly ahead, inflicts shadowblight, and deals bonus damage up to the number of buffs the user has. It does have a maximum bonus damage cap at 15 or more buffs. Which… is probably for the best since this skill is also her shared skill. It has a pretty high sp cost of 5,670 and an average shared skill sp cost of 9,072 and a solid share skill cost of 5. The big value of her shared skill will come in 2 forms, as a high combo count enabler, which pairs amazingly well with Overdamage and her pactbound kitty. And it also inflicts Shadowblight, which can be taken advantage of through by punishers. First impressions look promising, but the other pieces of information we’ll need to examine thoroughly will be the cast time and duration.

Chelle’s second skill, Burlone Gatto, reduces the strength of the target and nearby enemies, and also reduces the strength of enemies in buff zones. The strength reduction is 30% and 5% respectively, both lasting a measly 5 seconds. The sp cost is also quite high at just a little over 15,000, but it is a SIGNIFICANT Strength reduction will work multiplicatively alongside Grace’s 100% DEF buff ensuring that those pesky pub teammates survive any stackers Kai Yan likes to throw at us. Overall, this skill has strong utility and will be worthwhile in skilled hands.

Her coab is the standard manacaster ability of Gauge Accelerator +20% and her chain coab is entirely unique, Poised Shadowblighted Punisher +8%. This ability increases damage to enemies afflicted by Shadowblight while the adventurer is standing in a buff zone. The requirements for this chain coability are pretty easy to come by and this chain coab seems future-proof as more recent shadow units such as Dragonyule Viktor and Opera Karina are being released with more buff zone centralized kits. This is definitely something to consider when assessing Chelle’s value for your roster.

Her ability 1 has a similar ability as Leonidas, forcing the royal siblings to shift into their respective pactbound dragons seems to be the trend. And in addition, when chelle uses her skill 2, she’ll gain a Stack of Royal Pride, which is stackable up to 10 times and each stack reduces damage taken by 1%. It’ll be interesting to see here if the stacks count as individual buffs as this will further empower Chelle’s skill 1 AND also power up any potential share skills such as Karina or Xander shares that scale from buffs.

Her ability 2 is the standard dual resistance for a gala unit. For her, blindness and paralysis.

Her ability 3 increases Chelle’s Force strike damage by 45%, and further increases it up to an additional 30% based on the number of buffs she has, AND once Chelle reaches 5 stacks of Royal Pride, she will be granted a buff zone around herself that FURTHER reduces damage taken by 10%.

Individually, Chelle’s kit may not look impressive at first glance, but the total package is a very dominant sell towards survivability and high combo count. There are a few factors to consider if you’re looking to summon Chelle. This will come down to being a semi-limited Gala unit right before a limited collab banner as well as the meta of Legend Kai Yan. If you are a big fan of the Persona Series, I would highly suggest waiting as Chelle can be picked up on a future banner. In contrast, we aren’t truly sure if Persona will ever have a rerun. Additionally, giving a few days to see how the Legend Kai Yan meta shakes out will also let you decide if Gala Chelle is more of a need or a want for your current roster. Gala Leonidas turned out to be incredible for auto compositions and solo play in Volk so I do expect a similar performance from Chelle, but only time will tell.

Cat Sith is an excellent dragon, and pairs well with quite a few Shadow Adventurers. Unfortunately, Chelle seems better off with a Strength dragon to better compliment her Force Strike heavy playstyle! If you end up with enough wyrmsigils to summon, either candidate would be a great addition to your shadow roster!

Final Verdict: Yes, but only if you don't care about Persona.

I ultimately believe it is best to save your pulls and go wild on the collab for all the unique units, but if you decide to pull let me know how you do! Leave a comment below to let me know what you think! I’ll see you guys next time 😊 - 0rthodox

This will be one of the last articles I write for Game Press. Due to some life changes I won't be around as much, but you're in good hands with 0rthodox. I'll still be around on the Dragalia discord, and I hope you all have good luck in your summons.