Should you Summon? Gala Dragalia 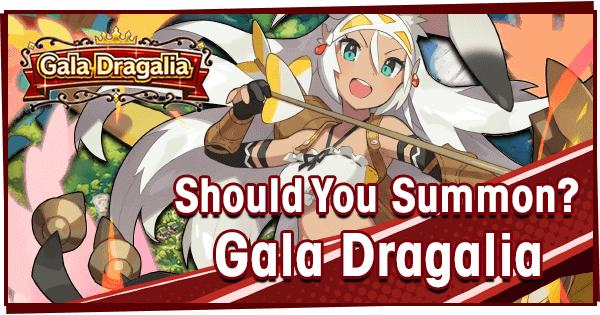 Verdict: With only Sarisse rated up, this banner should be an easy skip for most players. However, with the overall rate of 5★ drops temporarily boosted, it's a tantalizing banner to pull on. Anyone with hopes for a specific Adventurer/Dragon/Wyrmprint is better off skipping, but for those who wish to collect more Adventurers or increase unbind levels, it's a good deal.

Gala Dragalia Banners boost the base rate for a 5★ Summon to 6%, up from the normal 4%. This makes it more likely to summon a 5★ Adventurer, Dragon or Wyrmprint! The ratio of Adventurers, Dragons and Wyrmprints remains the same.

However, without anything but Gala Sarisse on rate-up, the chances are split evenly by everything in the Dragon and Wyrmprint pools. Non-featured drops will be highly random, but thanks to the higher 5★ rates, they will also be more abundant. For those looking to unbind Dragons and Wyrmprints, this is a good opportunity to collect extra copies or fill out the roster.

Please note that the rate for Gala Sarisse is 0.5%, the same as a rated-up Adventurer on a regular banner. Although the overall rate for summoning 5★ drops is higher, the chances of getting Gala Sarisse are no higher than on a normal banner.