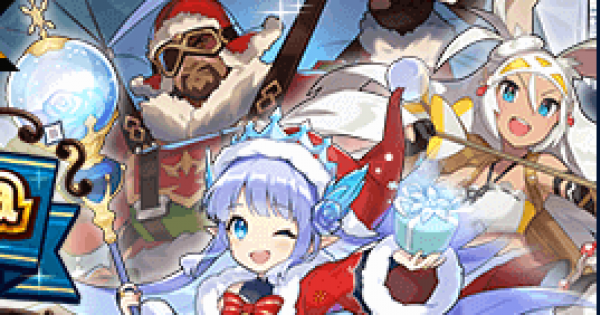 Disclaimer: The opinions below are written by GamePress and do not actually reflect Nintendo, Cygames or the fairy Notte's opinions... probably. If they somehow do, it's merely coincidental!

Wait, next time? Well poo. I guess the English Language (or whatever it is we speak) is safe for now.

Oh the Weather Outside is- RING-A-LING

Ok, I got ear plugs for all of us. I hear one more of Lily's RING-A-LINGs and I think my ears are going to start bleeding.

In a trend that Gala Zethia started, Dragonyule Lily may be a healer, but she's geared for damage just as much as she is recovery. Everything about her kit is about buffing Lily's own Strength as well as her team, and though her damage isn't as good as a purely damage focused Adventure, she can contribute a decent amount of damage as well as keeping you all alive. Provided you didn't just bring four Karina's and kill the boss in 20 seconds, but hey, gotta start somewhere.

Lily's first skill restores HP, increases strength and grants "over damage" on 40% of Lily's strength. This is basically an extra hit on attacks that is based on Lily's strength, and it's pretty good. I'm fairly certain that the overdamage is not calculated in most DPS sims, so understand that it adds a significant portion to the damage Lily contributes to a team and evaluate her accordingly. It's better for weapons like daggers that hit frequently (as it will get more triggers) and worse on slower attacks, but overall it's still powerful.

Surprise gift is kinda wonky, but it works with Lily's passive, which grants her "Saint Starfall" when she uses her S1. This lets her next three Force Strikes recover HP, and give her "Starfall Strength" which can stack up to three times. Then, you can consume this buff with her S2, scaling based off how many stacks she has, from 20% at 1 stack, up to 100% at three, all of which last for ten seconds. It seems you will want to use your S1, then quickly burn your force strikes to give yourself the buff. Unless you need to save the healing for certain mechanics of course, but this will be complicated to weave in and require good timing and management to optimize.

Lily's Chain ability is worth noting, as whenever you recover HP, you get an 8% Strength buff for 10 seconds, but this doesn't stack. It's pretty useful if you need a healer in co-op, as with double buff abuse this is basically a constant 8% buff. One of the best parts about Lily, however, is that she is double immune to Stun and Burning. I think she's actually the first non-Gala Adventurer to get this, and it's incredibly useful to have for a healer. Really, it makes Lily the first and last healer Water teams will need, unless you just need a stupid amount of recovery, in which case Lily isn't the best option.

Verdict: Maybe. Lily has great passives, good damage for a healer, and what looks like a fun and unique kit. But currently, Water is dominated by Queen Karina, and doesn't need a dedicated healer save for autoing. Consider that before pulling.

You know, sending a former assassin to deliver gifts just gives me all sorts of bad vibes. Victor doesn't come off as jolly so much as "if you don't have fun I'll kill you." Which, I mean, at least everyone is smiling? Or else? Heh heh please don't hurt me.

Dragonyul Victor has an instant use dispel on his S1. Thank Saint Starfall! While I don't see him displacing Bellina in Master Kai, he's going to make soloing it much easier based on my empirical testing. I don't know that he'll make autoing a slam dunk (I don’t have a Master Shadow axe at the moment), but it's certainly a lot more consistent with more dispels in the group.

The main thrust of Victor is using buff zones. This means he plays especially well with someone like Gala Cleo who provides her own as Victor is agnostic towards who created the zone. The way that Victor creates his own buff zone is by using a force strike after his own S1, creating an area that increases your teams crit rate by 15% for 10 seconds.

Unlike Lilly who has duel resistances, Victor is only Blindness resistant, which is too bad. Over all, he’s not exactly cutting edge, but in the right team build with a lot of buff zones, Dragonyule Victor is pretty good. He’s not the strongest in Shadow, but he can find a home on teams that need more dispels or with Gala Cleo to abuse her own buff zone. Even then though, his DPS and support are only middle of the pack, losing out to adventurers like Forte, Bellina, or Gala Alex in the damage department and Gala Cleo and Patia in the support.

Verdict: Maybe. If you have your heart set on autoing Master Kai Yan, Dragonyule Victor can look appealing. Otherwise, he’s not as strong as other offerings.

Sarisse made some of her famous carrot cookies for Dragonyule this year, which makes her the real gift of Saint Starfall in my book!

Time has left Gala Sarisse behind. She's pretty far down the list of DPS for Flame, and she just keeps falling further and further behind. I wouldn't pull for her unless this bunny girl was all you wanted for Dragonyule.

Verdict: No. Sarrise is outmoded.

All Adventurers are Limited here. There are no rate up dragons.

Final Verdict: Maybe. These are Dragonyule limited Adventurers, so if you want them, now is the time. However, there is almost certainly going to be more Dragonyule banners later.

Dragonyule Lily and Victor are both Adventurers with a specific niche they do well in, but are not universally good. As such, you'll need to decide if they'll fit your needs and teams, and go from there. I personally think Lily is worth investing in just for being a healer with duel res, but she's not certain to be great. Sarisse however is a dud, and not what most people will be looking for. Still, this is a Gala with limited Adventurers, and there are worse banners to go in on.