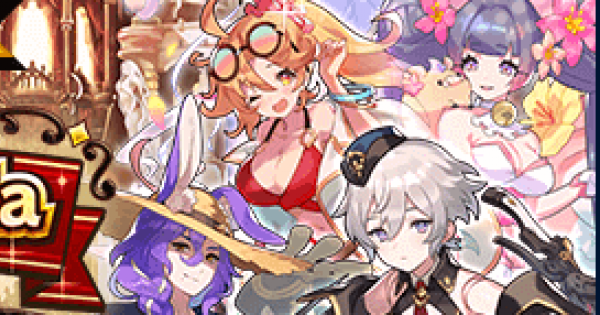 Laxi's back from the shop, and she's ready to party with some new friends! Let's take a look at the latest Gala Dragalia

Originally Laxi was kinda junk, but with her new upgrades she's ready to light a fire under those fiend's butts!

Though her base form is perhaps one of the worst Adventurers released to date, Laxi has received a few updates, and is ready to bring on a Ga-laxi of pain to her foes.

The big trick to Gala Laxi is Eden mode: this is a buff she gets when she uses her S2, that supercharges her skill set by granting her “Fig.” Fig will automatically attack your foes that are nearby three times every second, though the damage is counted as a normal auto attack. Laxi’s S1 goes from a single mediocre hit to a blistering flurry of blows that also inflict burn, and her S2 instead of granting another Fig will deal devastating damage.

Additionally, Laxi is granted a charge bar that will fill from regular attacks, force strikes, and dash attacks, which will grant cumulative buffs to defense, skill damage and strength. The bar won’t fill during Eden mode, and entering Eden mode consumes it. Laxi is also immune to Stun and Sleep, and has Critical Frenzy, which gives Crit rate and damage for combo count.

If all that wasn’t enough, Laxi has unique attacks for all her standard moves, including a regular hit combo, force strikes, and dash attacks. These have a longer reach than most dagger moves, and also move Laxi differently, so this playstyle will take some getting used to.

All of this adds up to an incredibly solid kit, to the point where Gala Laxi is easily the best solo DPS in Flame, better even than Marth. She doesn’t edge past the Hero King mostly because his ability to buff his teammates is what takes him from great to broken, but she’s certainly worth including on a Flame team for any content.

Verdict: Yes. Gala Laxi is a rock star Adventurer with a powerful kit.

That kooky scientist is back in action, and this time Sinoa is brewing up something potent for our summer fun!

Sinao’s kit is somewhat more straightforward than Gala Laxi’s, but it’s still pretty good. Her kit centers around her S1, which each time it is used, grants a stack of Overload in addition to dealing good damage and applying poison. Each Overload stack increases how long it takes for Sinoa’s S1 to be ready by 30%, as well as increasing damage of the S1 by 20% for the first stack, and 5% for each after. Overload stacks also change how Sinoa’s S2 works. For each stack, a random buff will be applied to Sinoa’s team, either 2 stages of Inspiration, 15% crit damage, or 20% Crit rate. If you have all three stacks, all three buffs will be applied, and if you have no stacks instead of a team wide buff, only Sinoa will get a single random buff.

Overall, this is an extremely solid and synergistic kit. Obviously, you’ll need to manage overload stacks to keep the buffs coming, but having a degree of control over what buffs are received is extremely helpful. It’s also interesting to have to balance the speed at which the buffs come out with the damage potential of Sinoa’s S1 as well as how quickly it can be used.

Once more, this is a great kit, and Sinoa looks to be one of the best DPS in Wind, potentially even surpassing the mighty Hawk when you account for her buffs.

Verdict: Yes. Especially at Gala rates, Summer Sinoa is very much worth getting.

Wait, Summer Norwin, was there a regular Norwin? Been here over a year? Oh. Guess I kinda forgot about that.

I’m not really sure who was asking for a Norwin alt, but I hope they’re energized by what has arrived.

Summer Norwin isn’t quite as good as Sinoa, but he’s not half bad. His kit is energy based, whith a unique double skill shift on both his skills, which cycles through four phases. Oddly, his two skills, Summer Memories and Ephemeral Love share the same SP cost and are functionally identical until the fourth phase. Each shift simply increases the damage of both skills in a steady progression, but at the final one, Summer Memories will consume stacks of Doleful Spirit, while Ephemeral Love will grant them.

The last phase of Ephemeral love hits very hard and but gives Doleful Spirit, which cases you to take 20% damage for each stack of Doleful Spirit, up to a maximum of 80%. In contrast, Summer Memories will deal no damage, and consume all stacks, resetting the skill shift counter and energizing you and your team. You can’t be energized when you have Doleful Spirit, which shuts down Norwin’s Energy = Skill Haste passive. Interestingly, it seems Norwin doesn’t gain energy conventionally, simply gaining all five stacks at once from his finisher and going straight to the energized state. This prevents some of the weird overflow issues that Energy caused.

It’s a pretty good kit overall, though Norwin isn’t nearly as good as Sinoa at boosting allies' damage, his selfish DPS is higher, though it’s not as good as monsters like Hawk or Gala Lief. I’m giving Norwin a maybe. He’s not bad, but he’s not amazing like Sinoa is.

Verdict: Maybe. If you get Summer Norwin he can be worth investing in him, but he’s not as valuable as Sinoa or Gala Laxi.

Sakuya's out to play, and it's summer flowers every day! Eventually. It takes her a while.

This dragon baffles me. In shorter fights, she does absolutely nothing. Literally; unless the fight is at least 60 seconds long, Summer Sakuya doesn’t provide any buffs at all. That said, every minute, you receive a staking buff. The first level gives you 40% Strength, the next adds 20% defense, then 50% skill damage, reduces water damage by 5%, and last gives a very powerful HP recovery buff, granting you 20% HP every 3.9 seconds. You can also get an increase to your buff by using Summer Sakuya’s skill. The buff is not consumed by anything, once you have it, you keep it for the rest of the fight.

Here’s the thing though: I honestly don’t know how sacrificing an entire minutes worth of Dragon aura is worth it, especially since until the third stack, you are seriously better off using Zephyr or something. Even at the third stack, I’m not convinced that Vayu isn’t just straight up better in most circumstances, though once you get that last stack you become nigh-unkillable which is pretty cool. It just takes so long to get there I don’t think it’s worth it.

Verdict: No. This is a seriously odd dragon and I can’t quite fathom the situation where she’s useful.

Final Verdict: Yes. This banner has two very good Adventurers and one solid one. The dragon is a bust though.

Both Gala Laxi and Summer Sinoa are very much worth adding to a roster, while Summer Norwin has potential to be good on a lot of teams. Summer Sakuya is baffling and probably bad, and I think they're just saving the good dragons for galas from now on.