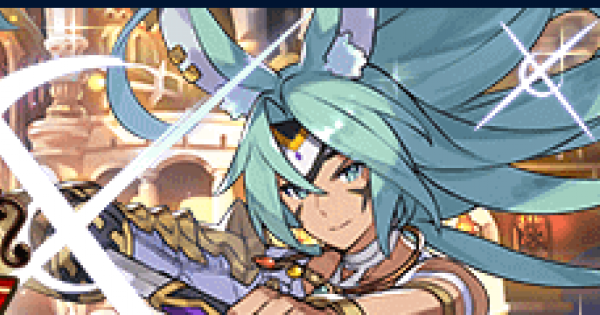 Should You Summon: Gala Luca Edition

Ahem. I am under no compulsion during this banner. We are pleased to announce that dearest Luccy, the bravest, most handsomest, most wonderful Adventurer, has rightfully received the most powerful alt known to sylvankind. He shall be hailed as a glorious hero.

Ok, do you think she's happy now, Euden? Will she let Cleo go? Ok, ok, you're right, stay in character...

It is a shameful display, that Luccy, bravest and greatest of Sylvans, did not receive his Gala Alt before other, less cute and inferior adventurers. We apologize for this oversight and will be donating 100 tones of apples to the Dearest Luccy foundation.

After several threatening letters from Chelsea, Cygame has finally released Gala Luca in exchange for their hostages. As a Gala exclusive, it’s safe to say that he’ll be good, but how good exactly? Obviously he’s worth summoning for, but Luca is going to simply be a solid, above average Adventurer, not a game breaker.

The most relevant detail to G!Luca is that he outclasses Yachiyo by a wide margin. As Yachiyo has been an essentially mandatory part of Light teams since her release, that earns him a spot in the meta. He’s also a bit better than DY!Malora in a vacuum, though her Defense down ability means that in relevant group content that gap narrows slightly. Basically though, G!Luca will become the new fixture of both Master High Zodiark and Dark Mercurial Gauntlet, and may even be the key piece that makes Light based groups viable for high end MG after the release of other powerful Light Adventurers in the past month.

But, on to the unit analysis. Luca’s kit is based on crit, crit, and more crit, but it also revolves around having unique buffs on Luca. His passive Connecting Call gives him 4% crit for each unique buff icon on Luca, up to a cap of 28%. Luca can personally give himself 12% crit from this passive, by giving himself a buff that increases his critical rate by 3% for 20 seconds each time he scores a critical, but each of those buffs is unique and they do stack. So, essentially, Luca can get a baseline 21% crit from his own buffs, with room for four more buff slots for an additional 16% crit from his teammates. It’s not that hard to stack buffs on Luca, with G!Euden being his best friend and Chitose not being far behind in that regard. While I wouldn’t expect to keep the full 28% from his passive up at all times, you can easily get to 20% and stay that way.

The rest of Luca’s kit synergizes incredibly well with Connecting Call. His S1 gets a 10% increase to the crit rate for each unique buff icon, and it’s not hard to get this skill to a 100% crit rate. That makes his S2 even better, as it increases his critical damage by 80% for 10 seconds. Flurry devastation is normally a good passive for 13% crit, but on G!Luca it’s pretty great and can even get you to 100% crit on all your skills with the right wyrmprint combination.

Interestingly, G!Luca doesn’t have a duel resistance, instead getting 100% Curse res, and his resistance being similar to an Adventurer with Mana Spirals as it increases his crit rate by 15% when he’s hit with an attack that could Curse. That’s cool, though personally I would have liked to have the poison resistance as Luca’s going to be getting pretty close to 100% crit rate anyway.

So, all in all we have an Adventurer who has a clear home in the current meta, a strong kit that synergizes well with existing Adventurers, and a weapon type that is very useful. As I said at the start, he’s 100% summoning for.

Final Verdict: Yes. Luca will have a place on every Light team going forward

Whew. This just in folks, we got her. Turns out Chelsea shouldn't have tried kidnapping Cleo. One Ancient Ray and it was all over! The hostages are safe, and everyone's going home from this one. Which is good, because apparently Luca spent all his time learning how to carve apples instead of fiends. I really need to sign these people up for Party Rehab.

As always, don’t chase these Adventurers, as they’re not on rate up. If you do happen to get one, consider it a nice bonus. However, as they’re only available during Galas, we’ll do a brief rundown, more or less from best to weakest.

Gala Cleo is the undisputed queen of the meta. Her large AOE Strength Buff, combined with a defense down and the massive amount of damage her skills do continues her dominance even after Cygames has desperately tried to rebalance the meta with Shadow Mana Spirals. So far, the solution to most of the games problems continues to be “Just Use Gleo," as certain yandere rabbits are sure to learn.

The Crown Prince of Light remains Gala Euden. While his personal DPS is lower than several new Light Adventurers, the multitude of buffs that Gala Euden provides along with his excellent coability and his ability rapidly gain dragon shapeshifts with his passive makes him mandatory for most Light teams.

Ever since her release, Gala Elisanne has enabled interesting new play styles in Master High Brunhilda, making it easier for teams to survive the opening blast with her S2 and allowing Lily to run double DPS prints, making for faster and safer runs, especially with G!Eli’s defensive coability. She’s no slouch as a Strength buffer either, and as such will continue to see high level play for a long time to come.

While Xania is the New Hotness for Flame teams in the ranged slot, Gala Sarisse continues to be a stellar performer if you give her a chance to shine. The power of the double bow wymrprints and her own generous buffing skills makes Sarisse an excellent choice for all Flame Teams.

Power creep and the popularity of her Halloween Form has slowly pushed Gala Mym further and further out of the meta. She’s still phenomenally strong and able to clear tough content, but the fact that she has to compete with Emma for the Lance slot really weakens her viability for most teams.

Sadly, time has not been kind to Gala Ranzel. He was much hyped upon release, but soon after him came Wedding Elisanne, who claimed the dominant spot for Wind Swords in the meta. He was even outshone before then by Addis, Melody, and even Musashi, so he never really found a home. Unless he gets some major buffs, Gala Ranzel will continue to be the weakest option for Gala Adventurers.

Final Verdict: Yes, but don’t chase. The rates for off focus Gala Adventurers are abysmal.

Final Verdict: Yes, unless you're a huge Monster Hunter fan.

Monster Hunter is the next banner, and those exclusive units are sure to have some big fans. They're also not likely to make another appearance for a very long time, if ever, so if you want them I'd urge you not to summon on this banner. For those of us who aren't as invested though, Galas are still the absolute best banners to pull on, and Gala Luca is a great addition to any team.