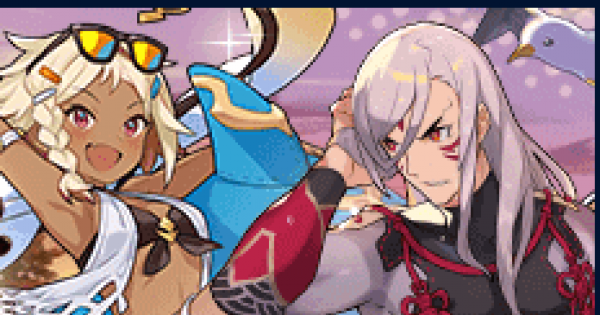 I would say it’s time to hit the beach, but since y’all can’t control yourselves maybe we should just stay home. I mean really, it’s been HOW many months of back to back Gala Banners? I’m done. There’s no need to- Gala Cleo, you say? And Mikoto has more kittens? AND Patia in a swimsuit? Never mind, party on!

First of Her Name

Wow. We get a Zethia in the Halidom, and what does Euden do? Parties, every day. It’s limited banner this and gala banner that! It’s non-stop! What’s a fairy supposed to do? I might be out of wyrmite, but I’m about to go up a dress size from all the treats. Because Patia is a snack.

Patia is beach body ready, and she’s packing in some potent Poison and powerful Force Strikes to do it. Even in Shadow, and Element so ridiculous that all the other Elements know for a fact which one Cygames loves the most, Patia is a stand out choice. The only reason she’s not hands down the best Shadow Adventurer on this banner is because Gleo is here too, but it’s actually closer than you might think.

First, a caveat: Patia shines best in short content, where she can use Gala Cat Sith to the fullest as she struggles to maintain a combo count because of how her kit works. Normally, this would be a bad thing, except that as of right now, most bosses melt like shave ice on the sidewalk at noon when exposed to Shadow’s explosive DPS. There is the possibility that Master Kai could require longer fights, but unless his health pool is so large you could maintain social distancing in it, I don’t see that happening.

As to her kit, Patia does it all. She has a three stage Force Strike that hits hard and if you’ve got Seaside Spirit it Poisons, and you can even move while using it just like Hunter Sarisse. You get Seaside Spirit from using your S1, Sparrow Splash, which is a Poison Punisher move that hits pretty damn hard and confers a 5% debuff down, because these days skills have to have more lines of text than a preferred weapon from Feh. Her S2 hits even harder, and it poisons, because why not.

Perhaps Patia’s most interesting ability is her Poison edge and Anti-Poison Strength. This looks to solve the problem of bosses slowly becoming immune to afflictions by granting Patia a 15% Strength buff when her poison is resisted, and it also increases her odds of poisoning by 60% if she’s above 50% Health. This is good if fights go longer, though remember on longer fights Patia is going to have trouble keeping Cat Sith active, and might be better off with Shinobi.

All in all, Patia has it all. She’s got DPS so good I’m giving her a Yes despite being a Shadow Adventurer (and a non-limited one to boot), and she’s got a fun and interesting kit.

Verdict: Yes. Patia serves up an Ace with a great kit.

People used to joke about how Phoenix and Mikoto had a thing, but I can confirm that they’ve never been more than good friends. However, Mikoto and Corsaing Phoenix DEFINITELY have a steamy relationship going.

Light needed a shot in the arm, and Mikoto is here to provide it. He’s not quite as good as Zhu, but he’s at least as good as Alfonse when it comes to selfish DPS in Light, which is great news. His abilities are about as long as some of the Russian novels I had to read for my undergraduate literature classes, so let’s dive in.

Basically, Mikoto’s Force Strikes are really weird, and give one of two buffs instead of, you know, actually doing damage. If you have those buffs, it superchargers Mikoto’s moves, making Radiant Bolt hit approximately as hard as a freight train and making Magnanimity’s call grant both 20% Strength and 20% crit AND 15% increased critical damage for 30 seconds, instead of just the Strength. Mikoto also has Paralysis shredder, which gives him 20% more Crit rate and 15% more crit damage when the foe is paralyzed.

It seems you’ll need to try to weave Mikoto’s force strikes appropriately, as you have a window of time for the Sunlight buff and another for the Wavelength buff, and you’ll want to keep both those active when applying your S2’s buff and nuking with your S1. It’s a weird and complicated playstyle, but it seems that it can really pay off if you do it well.

Verdict: Yes. Summer Mikoto is the new hotness in Light, and is worth getting.

These new adventurers sure are cool, but there is one thing you must remember:

ALL HAIL OUR ONE TRUE QUEEN, GLEO THE RAVAGER!

I don’t think I need to do a deep dive here. Gala Cleo single handedly took the Power Creep in Dragalia Lost and turned it to 11. She’s so broken that even nearly a year later, she’s the best unit in the game, and every other Shadow adventurer is trying to met the standard she set, and so far, none of them have really actually managed that. Oh sure, Gala Alex and now Summer Patia have come close, but they’re just not at the same level as Gleo, and the solution to a lot of problems continues to be “just use Gleo” even when we’re talking off element.

No other Element has an Adventurer that even comes to close to the blessed perfection that is found within Gleo. She does it all. She nukes, she buffs, she debuffs, she heals, and she laughs at what you pathetic mortals call “game balance.”

Cat Sith did not help.

Verdict: Yes. ALL HAIL GLEO! QUEEN OF THE META!

I think I know why they say men are from Mars now. He’s certainly the only Dragon Marth and Euden ever want to use these days. Poor Mym’s so depressed she won’t even come out of her Adventurer form, and even then she’s locked herself in her room to eat chocolate and listen to Enya albums.

Mars is the best Flame Dragon. There is no other Dragon that even come close in sheer power and utility to Mars. The only kinda argument is that Phoenix is better for a healer, except they just use Pop-Star Siren. The only Dragon that gives Mars a challenge is Cat Sith, and that’s because Shadow is so broken not even duct tape can fix it.

I guess this is the new normal. Gala Units are limited, the others are not.

Final Verdict: Yes. This is a Gala with Gala Cleo rate up. Really, we could have started and ended with that.

It helps that Summer Patia and Mikoto are actually really good and worth getting, but having Mars and Gleo featured as well makes this a no brainer. Summon away, everything featured is amazing.

Best Shared Skills for Unlock?
Guys which are the best Shared skills for unlock? 2 posts - 2 participants…
A small discussion about the next Gala character
Its kinda clear that Laxi will be the next gala character, that being said, I still…
Team options for Karina?
Is Gala Elisanne viable on a team with Karina? Or should I use regular Elisanne …
Can I just say WOW to GamePress Dragalia Lost's page for Karina?
It’s the first time I read about Karina here in GP, but wow, was it so fun to read it…
Chapter 14 discussion (warning: spoilers)
Now that Chapter 14 has arrived, what are everyone’s thoughts on the chapter and on…
Read More