Should You Summon: Halloween Fantasia II 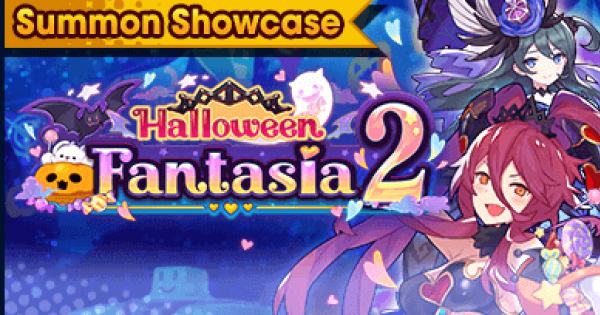 This is Halloween, everybody make a scene
Trick or treat till we're gonna die of moe
It’s our Halidom, scream!
In this banner of Halloween

Dressed up to dazzle and ready for combat, Mym steps up with some really excellent skills in her new form. Her first skill is a debuff zone similar to Bridal Elisanne or Delphi, both of whome are really excellent adventures. Even better, while her S1 has a somewhat long charge time for a first skill, it’s still charges faster than B!Eli’s S2 and isn’t fill over time like Delphi’s. Her second skill offers a 15 second teamwide STR 20% for Flame Adventurers and activates “Dream Boost.”

Dream Boost both ups H!Mym’s crit rate by 5%, and if she transforms while it is active she gets a 20% boost to her dragon from damage. Like G!Mym, H!Mym will always transform into Brunhilda, and has several bonuses for transforming. In H!Mym’s case, she also gets 100% increased defense while in Dragon form (in other words, she loses less gage from damage taken) and she gets a 15% attack rate boost while in dragon form.

Now it’s time to talk about H!Mym’s unique co-ability, Critical Damage +30%. This is...fine. It’s just fine. It’s not as good as a Blade or Wand co-ability for a pure damage boost in most situations, but it might be preferable to the standard Axe co-ability if your team doesn’t need that additional resilience. Of course, for fights like Expert or Master HMS, not having a defensive co-ability from a lance or axe can lead to some problems, and I don’t know that trading 15% defense for 30% crit damage is worth it. On the other hand, in Mercurial Gauntlet where only DPS matters, this could push your team over the top.

Aside from that somewhat lackluster co-ability, overall Mym is a very strong Adventurer. Even with high SP costs, offering a powerful zone debuff and a strength buff to your team along with some nice Dragon bonuses for burst damage makes Mym a great unique pick to summon for even amidst fierce Flame competition.

Verdict: Yes. Mym has a powerful kit and is only here for a limited time.

I am the girl with the pumpkin lance
Try to catch me, I’ll give you one more chance

Upon her initial release, H!Elisanne was easily the strongest Light Adventure, and simply one of the strongest generalists, able to perform off element in a lot of content. After a whole year of new releases, H!Eli has fallen somewhat, but is still a strong Adventurer.

H!Eli’s S1 is still great, offering three phases that include a STR and regen buff for your team. Her second skill hits hard and fills your skill gage, and she has passive +30% Skill Damage, always a fantastic boost. She has Gauge Accelerator as well, which is situationally helpful in breaking bosses faster.

As I said though, H!Elisanne is no longer the belle of the ball for Light. Her most direct competition is Annelie, who is essentially neck and neck with her damage wise and shares a weapon type, though Elisanne’s Curse res is typically more relevant. More abstract competition comes from perennially available 4★ Adventurers like Odetta, Fleur, and Yachiyo, who all offer alternative budget picks, though they don’t provide quite the same niche that H!Elisanne has.

In the end, while H!Elisanne has some competition now, she’s still able to shine and thrive in the current environment.

Verdict: Maybe. If you have holes in your Light Roster H!Elisanne is certainly worth picking up, but she’s not the top tier meta pick she once was.

This version of Lowen is basically the same as his Wind Version, just shifted to Flame and given a Sleep resistance, along with a super useful Force Charge ability that allows for a panic button when you need to quickly get off an emergency heal. As OG!Lowen is a fantastic Healer for High Mercury and all other Water content, that automatically makes this version of Lowen a great healer.

However, there is a slight problem, namely that Sleep Resistance is basically useless. When it comes to High Dragons, Verica and V!Hildegard are both way better choices simply because they have Stun Resistance. That said, Void Zephyr is the perfect home for V!Lowen, and if we ever get Expert or Master Void Dragons (or similar content) then he’s poised to be an Allstar for those modes.

Verdict: Maybe. H!Lowen is a strong healer, but he has no current home, and pulling for him is essentially banking on future content needing a Sleep resistant healer. Since he's limited, that's a gamble you'd need to take sooner rather than later.

H!Odetta is a support focused swordswoman, much like her original Light form. She’s traded in her heals for an additional 5% Strength on her S2, which is a perfectly reasonable trade off in most cases, and she has Primed Defense instead of STR conditional, which again is a reasonable trade for a support unit to make.

However, let’s talk about the Pumpkin in the room: Elisanne. The original version of Eli continues to be one of the best buffers in the game, and frankly she’s going to do just about everything that H!Odetta could do better. The only advantage Odetta really has is that she offer’s Primed Defense to trigger Double Buff skills, but that honestly isn’t enough to make up for how much faster Eli’s S1 charges compared to H!Odetta’s S2.

Still, it’s not as though H!Odetta’s kit is bad or she can’t be a boon to your team, and thanks to her limited nature this is the only time you’ll be able to pick up H!Odetta in the foreseeable future.

Verdict: No, Elisanne just does support better. Collectors will still want her though.

I am the fangs waiting in the dark
I’ll take a little bite, but I’m no shark

Overall, H!Althemia isn’t a bad healer choice. She’s got a solid HP restoring skill in her S1, and her damage from her S2 isn’t bad. However, the fact of the matter is no one is taking H!Althemia over the plethora of other stronger Light Healers. Hildegard is simply a titan of healing and will be any team’s go-to choice for a healer in content where it is required. And if damage is what is needed along with healing, Odetta or H!Elissane are both better choices.  If you don’t have another Curse Resistant Healer H!Althemia isn’t a terrible choice, but she’s just not a meta pick.

Verdict: No. For collectors only.

I am the servant that goes unseen
How’d the tea get ready? It’s a mystery.

The only thing Halloween Edward has going for him is that he has a Blade Co-abilty, which is very useful. However, Yachio now exists, and so completely out performs H!Edward that he’s simply not worth investing in.

Verdict: No. Collectors only.

The big fluffball is back, this time as a Water Attuned HP and Skill Haste dragon. This instantly makes H!Maritimus the best Dragon for all Water healers, replacing the rather lackluster options they had prior. He even offers an HP restoration active that staples on a zone that boosts skill damage by 30% for 10 seconds.

Additionally, H!Maritimus is going to be the best choice for buffers, especially original Elisanne who is going to really appreciate being able to fire off STR buffs even faster.

So, should you summon for Maritimus? If you’re only interested in playing DPS Adventurers, no. Maritimus is a terrible choice compared to Leviathan or Siren for Adventurers dedicated to dishing out damage to the boss. However, if you prefer to play support or heals, then Maritimus is certainly the dragon for you.

Verdict: Maybe. Yes if you want the most out of Elisanne or a healer. For DPS focused players, no.

H!Silke holds the distinction of being the only 4★ dragon ever added to the summoning pool, even if only temporarily. Unfortunately, she’s also a mixed dragon. This makes her a novelty item, as more easily accessible dragons like Unicorn or Lindwurm are going to be preferred even as budget choices.

Verdict: No. For collectors only.

!THIS IS A LIMITED BANNER! None of these units are going into the permanent pool, so get them while they’re hot!

Free summons! Two free ten fold summons are available on the 19th and 20th of October, so you get 20 free summons total. It may be worth doing those first and seeing what you get before diving deep.

In this halidom we call home

Everyone hail to the summon song

Final Verdict: Yes. This is a limited banner with great offerings.

As a limited banner, if you want these units you’ll have to summon now or wait for either a rerun in some vague time in the future, probably next year on Halloween. H!Mym is a real prize for anyone, while H!Elisanne and Maritimus are both strong but more niche choices. The 4★ offerings are also pretty good, especially H!Lowen for his sleep resistance. Overall this is a good time to summon, but don’t forget the Megaman collab in a month!