Should You Summon: Knights of Glory 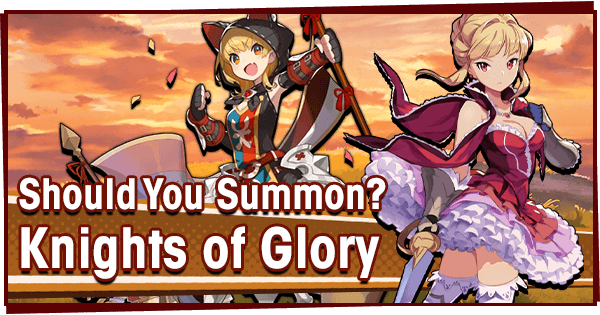 Should You Summon: Knights of Glory

Euden! Euden! He’s our man! If he can’t do it- we’ll summon a girl who can! Oh that’s right boys, I went there! These ladies in this banner kick butt and you know it! Onward to glory! 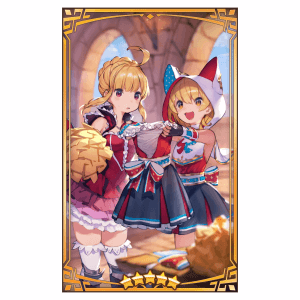 Burn baby burn, disco inferno! Well, disco may be dead, but Lea’s here to dance all night and turn her enemies into toast all day.

Thanks to the recent affliction rework, adventurers whose kits rely on keeping bosses afflicted have become much better. That’s good news for Lea, as a good portion of her damage comes from her ability to inflict Burn. Her S1 is primarily a fast way to inflict Burn and keep the boss afflicted all through the fight.

However, the main focus of Lea’s kit are her S2 and Force Strikes. Her S2 is essentially the same as Fjorm’s Ice Mirror, in that she will want to time it to take a substantial kit, and then heavily punish the enemy by reflecting a large portion of the damage. Unlike Fjorm Lea does not have 100% skill prep, and can’t reliably fire it off during an initial blast unless she takes the Chocolatiers print. She also lacks an HP threshold ability like Last Bravery, which makes tanking her HP less appealing. While Midgardsormr is no longer the games hardest fight, expect to see some Lea shenanigans taking place there.

The other aspect of Lea is that she is heavily invested in Force Strikes, with both 50% more strike damage and 12% Striking haste. She’ll utterly shred bosses overdrive bar thanks to Swords already excellent Force Strikes, and it’s easy to recommend you focus more on building towards that than on a one time burst with Skill Prep.

So, Should You Summon? The answer is simple: Do you need a powerful Flame Adventurer that capitalizes on Breaking bosses? If you already have Marth, I can’t really recommend you pull for Lea as they’re roughly equivalent in many regards. However, as Marth was limited, a lot of folks missed out and Lea is a great alternative. In the end, look at your Flame Stable, and if you need a great Flame Adventurer go ahead and Summon as Lea’s pretty great. However, leave room for someone else on this banner.

Verdict: Maybe - Depends on your stable.

They say you should hit the books, but I think Maribelle makes the books hit you!

Student Maribelle is still one of the best Flame Adventurers, and is certainly the current best Flame Wand. She’s well worth pulling for on her own if you have holes in your Flame stable, and isn’t a bad consolation prize if you were going for Lea. Still, there’s a lot of competition in Flame with old time favorites like Mikoto and new unites like Rena who both outperform Maribelle in a vacuum, though her Wand co-ability shouldn’t be underestimated.

Should you Summon for Student Maribelle? Only if you are willing to take her or Lea, as your chances are equal. Again though, there’s another on this banner you might want to considering trying for first.

Verdict: Maybe. Only if you have holes in your Flame Roster.

At first glance, Emma doesn’t look like she does much. She’s a Flame Lance with double support skills and rather low personal DPS. And, if you were to throw Emma on a team that didn’t have any other Flame Adventuers, she wouldn’t do much. Of course, anyone who takes a second look will see that Emma offers the best available Flame Support, which is historically an area that has been lacking outside of Karl and Sinnoa who somewhat underperform compared to their peers in other elements.

With an S1 that grants 25% STR for 15 seconds and a 25% buff time, Emma is immediately the best Flame Support and joins Noelle as a must-have for every single team of her Element. However, unlike Noelle, Emma has no damage skills of her own. She plays best in the hands of the AI on your team, and is rather less impressive when she’s the one you’re controlling in a group with other players. This is due to her Primed Strength ability, which gives 5% Strength whenever the Adventurer you’re controlling’s S1 becomes available. This is amazing if you’re using someone like banner mates Lea or S!Marribelle, but less so if you’re controlling Emma herself as her S1 is a buff, and her S2 is also a buff.

Still, that’s not a huge downside. Offering a Shield and Defense Buff on her S2 allows Emma to reliably trigger Doublebuff skills for teammates. She herself is best off going with Buff Time prints and Skill haste, as she has no damaging skills naturally. In places like Mercurial Gauntlet and raids Emma is invaluable. In content like High Midgardsormr she’s less impressive, but honestly her support is so potent that’s still really awesome support.

Should You Summon for Emma? Yes. Yes you should. She’s easily the best offering on this banner and will fit into every Flame team and Flame content for the foreseeable future.

Let Vanessa AXE you a question! Wait, no, I did that one before. Vanessa’s got an axe to grind! Too cliche. Man, these puns are harder than I thought. Hey Euden, what's a good axe pun? Axe you later? Oh ha-ha. Everyone thinks they're a comedian these days.

While Vanessa is no longer one of the top Flame Adventurers, she’s also pretty far from the bottom. She continues to provide solid damage and can find a place on a lot of Flame teams. She doesn’t provide any additional support to her team, but you could do a lot worse picking out a 4★ Adventurer to invest in. She’s not nearly as valuable as bannermate Emma, but she’s still a decent pickup. Don’t summon for Vanessa in particular, but a new player that snags her should be happy to have a reliable new recruit.

Verdict: No, but she’s a good pickup if you are going after Emma.

Sometimes you chase the sun, and you get burned! Apollo’s got his Chariots of Fire though and is streaking through the sky!

Joining Pazuzu as one of the affliction punisher dragons, Apollo looks to offer an alternative choice for Adventures with a Burn focused kit. There is, sadly, just one problem. Sakuya is a better dragon is just about every single case where Apollo would also be an option. There are also old standbys like Cerberus and Agni that offer reliable, widely applicable boosts that are not limited in usefulness to only a small portion of your roster.

Of course, Apollo isn’t bad, and adventurers like Lea or V!Ezelith would really appreciate having him, but there are just so many other choices that anyone can use, I just can’t recommend spending limited resources on Apollo.

Verdict: No, there are too many other options that are better or nearly as good. Only summon if you utterly lack 5★ dragons and have Burn focused Adventurers already.

Like the other 4★ strength dragons, Ifrit is perfectly serviceable. Many players are either going to have Ifrit as their main dragon due to him being easily Max Unbound, or will use him on one of their other teammates until they obtain more 5★ dragons. Get one or two copies and MUB through the void shop or other rewards.

Verdict: For newer or or budgeted players, yes. Everyone else: No.

Sorry everyone, I know my jokes just weren't as good today. This banner is great and all, but I guess I'm just not feeling it. It's almost like something new and really impressive is just around the corner and I'm saving all my energy for that. Wait, can it be...? SWEET SASSY MOLLASSY, EUDEN COME QUICK! Save your wyrmite guys, I just saw what's next and it's incredible!

On the Summon Rates:

THIS IS NOT A LIMITED BANNER. All units have gone into the permanent pool.

Final Verdict: Maybe. There's good stuff here, but hold on to your wyrmite.

This is a decent enough banner with strong Adventuers and a real gem in the new 4★ support. However, in only two weeks, the anniversary should be here. At that point, we’ll know just what it will offer. It’s probably wise to hold off at least until the end of this banner, then decide on whether or not it’s worth your wyrmite to summon this time.