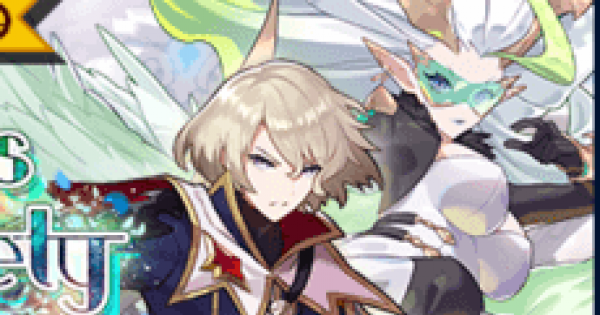 Should You Summon: No Renegades Edition

Alright! I do love me some pie! After the pancakes last time around, I could really go for a nice big slice a la mode! And I-what’s that? PIETY? Oh for crying out loud. Sigh. Here’s a bunch of Holier-than-thou types. Man, talk about ruining my expectations.

Wait, I’m confused, wasn’t Tobias like a bad guy or something? I thought he worked for the people that sent Alex to kill us! Well I guess it’s better to have him on our side, and he seems pretty supportive now.

Tobias is a unique addition to the Wind Roster, being an adventurer who continues to experiment with different co-abilities instead of being tied to his weapon type, blade. Normally, I’d say that trading a blade’s 10% Strength Co-ability for anything else would be a terrible choice, but this works out in Tobias’ favor as he gains a Buff Time bonus, and his S1 is a 30% Strength buff. Having a different co-ability allows Tobias to easily be run alongside Victor in Wind comps, and he has the potential to surpass even Noelle as a Wind buffer.

A problem, however, should be apparent to anyone who’s run a lot of HMC. Namely, that while Tobias’ buff is mostly just superior to Noelle’s as their SP cost is roughly the same for their S1’s and Tobias offers a 5% higher rate, Noelle’s ability to be an optimal buffer is tied to her ability to attack from range, allowing her to bait bubbles, spits, and other abilities away from her team. Her 15% Skill Damage co-ability is also nothing to be sneezed at, and it’s questionable as to if teams would want to run both Noelle and Tobias, though thanks to their differing co-abilities and play styles it’s entirely possible to do so.

That is where Tobias’ S2 comes into play. Sacred Blade has a whole lot of text, so let’s break it down. Essentially, it is a fill over time skill that changes Tobias from a medium range melee Adventurer into a pseudo ranged turret, as he cannot move while it is active, and it lasts 10 seconds. This means no Force Strikes or dodges, though you can still use skills to i-Frame many attacks. While this skill is active, your S1 will fill over time, though your regular attacks still fill it so it becomes fairly spammable. Additionally, you can activate the skill again to end the stance early, which unleashes a damaging attack that also Poisons. Tobias’ passive’s are excellent, with 25% Buff Time and 30% Poisoned Punisher that synergize with the rest of his kit.

That poison is huge. I can’t say for certain who Tobias will replace on a HMC team, whether he’ll replace Noelle (either taking the baiter role himself or passing it off to a Wedding Elisanne) or a W!Eli or even Victor, but I can say that his kit is potent enough that he will see play. Having a powerful buff along with the ability to poison the foe turns Tobias into hands down the best support Adventurer in Wind.

The main thing holding Tobias back is his rarity. Noelle is relatively easy to acquire, whereas Tobias is far more difficult. That definitely makes summoning for him on this banner a good prospect, but it does mean that it might take a while for him to really prove his worth. Plus, Noelle will still have her niche, though what it will be moving forward is unsure.

Verdict: Yes. As both a powerful buffer and a Poison enabler, Tobias is certain to make his way onto the best Wind teams.

We already have one back at the Halidom anyway.

Templar Hope is interesting only because he’s the first non-Gala and the first 4★ Adventurer to have duel resistance. That’s a novel concept, but that is basically it as far as usefulness goes. Sure, having a 25% Defense buff is pretty monstrous, and you could use T!Hope to cheese opening blasts. But that doesn’t justify bringing him or summoning him, as there were already gimmicks you could try that just don’t add up. Having a teamwide healing Doubblebuff is nice and all, but it’s not going to replace Wedding Elisanne’s ability to heal up a team. Maybe someday T!Hope will get Patia’s treatment and acquire a Strength buff to go with his Defense buff, but for now he’s more like T!Nope.

Verdict: No. While Hope has a novel kit, that doesn’t translate into a good one.

She’s got a power and a force that you've never seen before.
She gives Adventurers the ability to morph and to even up the score.
No one can ever take them down
The Thighs are on her siiiide.
GO GO ARIEL!

Despite the fact that Wind already had a 2nd Generation Dragon, Cygames went ahead and blessed us with a second helping in the form of Ariel. Make no mistake, that 30% Skill Haste is no joke, as those who have tested out Dark’s new Agito weapons can attest, though she's not quite as good as attack rate. It allows you to fire off more Skills, which for Adventures that rely on skill damage is invaluable. Combined with 50% Strength, and you have an incredibly powerful dragon on the offering. Ariel is now easily the best generalist Wind Dragon. The only Wind dragon who even competes is Freyja, and that’s only because she offers an HP bonus that is excellent for Noelle and healers, especially as they need to make the HP check on various fights.

Vayu will continue to be used (especially on Victor who can only stack so much Bleed), and if you do have Garland already, fear not, he’s still pretty good. But Ariel simply blows both of them out of the water in the majority of circumstances, and she’s easily worth summoning for.

Verdict: Yes. Ariel sets a high bar for Wind dragons and will be one of the best options for the vast majority of the Wind roster going forward.

This is not a limited banner. All featured Adventurers and Dragons are going into the permanent pool.

Final Verdict: Yes. Though this is not a limited banner, these are powerful additions to the Wind Roster.

Tobias is turning out to be an absolute monster of an Adventurer, and Ariel is one of the most powerful dragons we've seen released. They'll both have a big impact on the meta, and it's easy to justify pulling for both. Templar Hope is pretty disappointing as is Eleonora until she gets a mana spiral eventually, but that doesn't detract from the power here. I'd certainly be willing to throw a few tenfolds at this banner, though I'd advise against going utterly ham on a non-limited banner with standard rates.