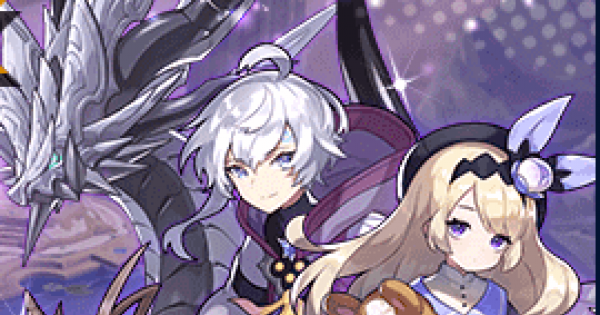 Hello Darkness my old friends. I’m come to summon you again. Because Agito is quickly creeping. And it’s time to fight again.

Delphi can see the future, but can he see why dragons love Cinnamon Toast Munch? … No, Delphi. It’s not because it has massive poison ticks. It’s got Cinnamon Sugar Mana Spirals in Every Bite!

As the originator of the Poison Meta, Delphi remains one of the best options as a Poisoner for Shadow teams. He’s at a slight disadvantage to Neferia now that she has her mana spiral dispel in Agito, but he’s still both powerful and prevalent.This is a combination of both his poison and his defense down zone, which combine to give him some of the highest DPS in the game as well as helping to enable the rest of the Poisoned Punisher Adventurers such as bannermate Lathna.

If you’re going to summon on this banner, it should be because you’d be happy with any of the Shadow Adventurers that are featured, and honestly I think Delphi is the star of the show. He’s viable in High Jupiter, Kai Yan, and very good in Mercurial Gauntlet. As he provides a pathway into all endgame content, Delphi is definitely worth grabbing.

Verdict: Yes. Delphi is a key part of the Poison meta and great for any content.

You can’t make me talk to Lathna again! Do you even have any idea how long I was possessed from last time? I’m drinking a gallon of holy water and bringing Cleo along for this. I don’t care how cute and powerful she is now.

From her origination, Lathna was always good, slithering through the meta and waiting for the day when the Poison Meta arose. Well, from the Darkness, it has come, and the Poison Meta has established itself in Kai Yan as one of the dominant forces, and its tendrils are intruding into High Jupiter even as we speak. Now with her Mana Spiral, Lathna is a force to be reckoned with. She hits hard, especially in comps that focus on poison and pairs very well with both her banner mates.

However, Patia is also on rate up on this banner. I won’t go too deep into comparing these two lance lasses as they have very different roles, but know that they’re both excellent in their respective roles, and if you get Patia she can definitely be used in place of Lathna, though she’s more of a buffer and doesn’t work as well in poison comps. It does put a damper on pulling for Lathna though, as investing a ton of wyrmite into this banner just isn’t the best idea.

If you do get Lathna though, she’s an excellent entry point to Agito, but isn’t really all that desired for HJP which remains the Gleo and Her Inferior Friends Show.

Verdict: Maybe. Lathna isn’t quite as good as the other two 5★s on this banner, but she’s still pretty good.

Rise, Nefaria. Rise from your grave, and become meta!

For a long time, Neferia had the dubious distinction of being one of the worst natural 5★s in the game. However, with the arrival of her mana spiral she’s gone from bottom of the barrel to the top of the heap. She now enables poison as well as providing a very much needed Dispel. Her DPS has gone from being pathetic to being incredible, and it’s no surprise that Neferia has risen along with her spiral.

Compared with Delphi, the main Advantage for Neferia is, of course, her Dispel, which is mandatory for Kai Yun. Don’t underestimate her bow status as well though, as her Force Strikes are absolutely monstrous for dropping a bosses Overdrive bar with the right build and she can attack through periods where a melee Adventurer like Delphi would need to retreat. Lacking the Defense down zone is a trade off however, and she’s also squisher than Delphi is due to melee’s better bulk. Ultimately however, getting either Neferia or Delphi is a great way to break into the end game right now, and I’d be happy summoning either. It can be worth it to acquire both as they do have very different kits, but I wouldn’t throw that much wyrmite at this banner.

Patia is the only 4★ worth talking about on this banner, but she’s good enough to get a short section. Essentially, Patia is an alternative to Poisoned Punisher compositions. If the team equips the Odd Sparrows Wyrmprint, it can provide a steady source of healing as well as constant Strength buffs from it’s two Double Buff passives. Patia’s buffing skills are really something else, and a Double Patia team is a viable option in Kai Yan thanks to their resilience as well as their explosive damage potential.

Compared to the 5★s, Patia lacks the synergy with Poisoned Punisher teams, but as a buff bot she’s an excellent option and she’s far easier to acquire. If you’re looking for a good budget option, Patia is it.

Verdict: Yes. Patia is a strong option, though she’s not as popular or powerful as the Poisoned Punisher team.

But why THESE dragons?

Quit dragon your tails, guys! Perk up! Even if you’re not a super cool ninja and Fatalis is hogging all your food, you’re still dragons! So act tough! Nyarlathotep, stop asking for belly rubs!

Between Nyarlathotep and Cthonius, I have to give it to Cthonius as he’s probably Delphi’s second best non-limited Dragon option, behind the new Epimetheus. Outside of that though, neither are really worth summoning for. Shinobi is just the best non-limited Shadow Dragon full stop, and the limited options of Fatalis and Marishiten are typically better, and that’s taking into account the fact that Fatalis basically locks you out of dragon form.

Nyarlathotep’s problem is that he’s a really strange dragon. He’s got only 50% HP on an HP conditional, which is pretty bad. Granted, that conditional is only >30%, but still. His other passive does give him a 30% Strength buff that can last for 20 seconds, but if you take more damage the buff will vanish and it generally isn’t worth it.

Cthonius offers at least a respectable 55% Strength buff, which increases by 10% each time you transform, up to 75%. The problem with this is that having to wait to get your full 75% buff is pretty bad, and the only Adventurer that will put up with this is Delphi, as Shinobi is mostly worthless to him as his Poison doesn't scale off skill damage, and even he would prefer Epimetheus as his Poisoned Punisher is much easier to take advantage of.

If these dragons had been Shinobi and Epimetheus, I would have been happy to say yes and maybe, and give this banner a better recommendation, but as is these are the strictly worse versions.

Verdict: No. Neither of these dragons are worth investing in at this time.

This is not a limited banner, and does not contain the new Adventurers from Dash of Disaster.

Final Verdict: No. Unless you absolutely have a barren Shadow roster, pass on this one.

Banners like this are primarily designed to allow newer or unlucky players to get an Adventurer to help them clear the new Light Agito, but honestly even those players are better off saving up for the Half Anniversary event coming up in a few weeks. This banner isn’t limited, and while the Adventurers are all good, the dragons on this banner are painfully bad, and that should discourage anyone from pulling.