Should You Summon: Stirring Shadows Part I 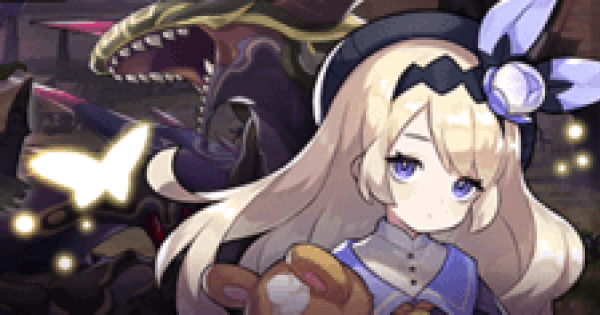 Oh my acheing head! I must have eaten too much candy. That sure was fun though! What’s this, someone’s at my door already? Guess it’s the new Summon Showcase!

In Dark Halls She Lies Dreaming

Ugh, I hate it when someone knocks on the door so early after Halloween. Aw! It’s a cute little girl and her teddy! Must be a late trick or treater. Hey little girl, you can have some of my-SWEETSASSYMOLLASSYWHATISTHATTHING!!!!

Lathna’s kit is somewhat puzzling. Her first skill has a Poison Punisher attribute, but she herself lacks any way of inflicting poison outside of Dragon Form. This means she’s really best used paired with Delphi or someone else who can consistently inflict poison for her, as it really helps her S1 out. Otherwise, her S1 is pretty unremarkable, as while it has a relatively fast charge time, it’s damage multipliers without the poison are fairly mediocre. With Poison however they turn into a devastating combo, though like Ramona the length of the animation can be troublesome at times.

On the other hand, Lathna’s S2 hits very hard and charges relatively quickly for a second skill. Aside from hitting like a truck, Lathna S2 doesn’t do anything special, but the damage it does is significant enough to be worth noting.

The next odd part of Lathna’s kit is that she will always transform into Nyarlathotep, no matter what dragon she has equipped, and she has +25% Dragon Time. Now don’t get me wrong,  Nyarlathotep’s attack animations are actually decent, and this version inflicting poison does synergize with Lathna’s kit. However, Lathna really doesn’t want to be using Nyarlathotep as her dragon, far preferring Shinobi as a dragon choice. Limiting her ability to inflict Poison to her dragon form and also increasing her dragon time doesn’t seem to go well with the rest of her kit, as she doesn’t have any innate bonuses dragon damage, and spending more time in dragon form means that she’ll have to time her Poison infliction wisely to be able to actually take advantage of it back in Adventurer form.

All in all, thanks to a somewhat baffling kit, Lathna’s not exactly the most synergistic of Adventurers. Her co-ability is worth mentioning, as extra survivability can be useful. However, Botan is a freely available Shadow Lance who also inflicts a debuff in Bleed, but also provides a consistent Strength buff. Ultimately I would typically recommend investing in Botan over Lathna, though Botan’s lack of 100% Paralysis resit does put her at a disadvantage when looking at Lathna’s own immunity to that affliction. However it’s somewhat moot for both of them as currently High Jupiter groups have rather narrow character preferences.

Final Verdict: Maybe. If you have Delphi (or will be playing with one regularly) Lathna goes great with him and you should consider getting her as together they are incredible. Otherwise, her lack of reliable Poison infliction on her own means you’d be better off targeting other Adventurers further down the line.

I don’t know what that thing was, but it wasn’t a little girl! Curran, Curran, get Heinwald! There’s something spooky going on!

Curran has always been in a bit of a tough place as a Shadow Adventurer. On one hand, he has excellent burst and a solid kit, as well as a useful defensive co-ability. On the other hand, Sazanka came out before he did, and she's strong enough to stand on her own, and is a much better choice for those who don't have Ieyasu to inflict bleed. Even worse, Shadow seems to be the element that consistently gets the most powerful Adventurers, from Ieyasu to Gleo and now Delphi, meaning that even the solidly performing Curran gets left in the dust.

Ultimately, unlike his partner Heinwald, Curran just doesn’t have anything to make him stand out in the crowd. He’s certainly a worthy pick if you need to fill a slot in your shadow team, but he’s also easily cut for other more powerful options.

Final Verdict: No. Curran is a middle of the pack performer, and it’s simply not worth a large investment of resources to obtain him when so many other options exist.

This has got to be one of Kleimann's crazy experiments gotten loose! Quick, Berserker, get rid of it for me!

As release 4★ heroes, Berserker and Kleimann simply don’t stack up to the newer choices we’ve been given. They’re both rather excellent in Light IO, but at this point thanks to the nerfs that stage has received only the newest players will need any help farming there. You’re also pretty much assured you’ll get these two eventually if you play long enough, so there’s no need to try very hard to get them, especially on this banner.

Verdict: No. These two have long been powercrept, and are not very hard to obtain over the course of regular free summons anyway.

That’s it Curran, that’s the monster! It’s so scary! It’s so big! It’s so...wiggly! Oh my gosh, look at the wiggles! I just want to love it and squeeze it and call it George! Because I really can’t pronounce whatever that name is.

He Who Must Not Be Named (mostly because it’s so hard to say) is a dragon with a checkered past. Even with his recent buff, old Wiggles the Wonder Dragon simply isn’t worth using. His baffling mixture of offensive and defensive abilities is completely outshone by a number of dragons now, namely Shinobi, Chthonius, and Marishiten.

That’s really too bad, as Wiggles really does have pretty good attack animations and his kit is really interesting, offering a last minute defensive and offensive buff. But the fact that his damage buff is conditional and not even that remarkable when you’re above the threshold simply means that you’re better off using another dragon, even Juggernaut, who offers a comparable damage buff without the restrictive conditional.

Verdict: No. There are simply too many far superior options.

Awww, he's just like Silke! Scary on the outside, but once you give some belly rubs he's Ph'nglui mglw'nafh Nyarlathotep R'lyeh wgah'nagl fhtagn.

As a mixed 4★, Silke simply isn’t worth using for any but the most limited beginners. Even then, you’d be best off not unbinding her and saving your Moonlit stones for STR or HP pure 4★ dragons.

Verdict: No. Mixed dragons, especially 4★ ones, are vastly outdone.

This is not a limited banner. Lathna has gone into the permanent pool from whence the others came.

Ugh, my head. All my candy is gone, and for some reason I can taste colors now. Heinwald's talking about exercise too, the jerk. Just because I ate a little too much candy give him no right to exercise me! I'm just fed up with this whole thing.

Final Verdict: No. Only Lathna stands out, and even she has strict build around needs.

While Lathna can be strong, her heavy reliance on her teammates to inflict poison for her makes her a somewhat iffy proposition, and nothing else on this banner has anything to recommend it at all. Save up for part 2 to see if that has anything to interest you, or wait for the soon to come limited banners like Christmas.