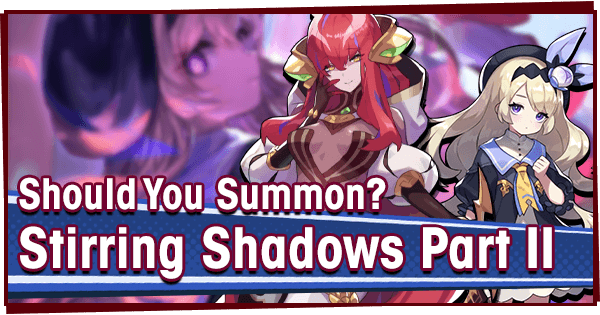 Ok, finally, enough with the spooky stuff! I love Halloween as much as the next candy addicted fairy, but that was way too much for me! This nice lady even asked me to come to church with her for the next banner, I can’t wait to En'othk uulg'shuul. Mh'za uulwi skshgn kar. Ugh. Maybe I should have let Heinwald exercise me…

You are a pawn of forces unseen

It’s ok though, Akasha says she’s a priest! I’m sure she can help me with...whatever this thing with me is. Sweet, she gave me a matra to say! Let’s see, let’s start with “Tell yourself again these are not truly your friends.” Wait, what kind of church is this again?

Akasha comes at a hard time for Wind Healers. The recently released Master High Mercury has high DPS requirements, and damage that is nearly completely avoidable aside from the initial blast. This means that even Lowen, who was incredibly powerful and popular to use for regular High Mercury runs, has fallen out of favor. Indeed, in my experience most groups even for Expert High Mercury much preferred me to use Bridal Elisanne as a healer (who, by the way, I was wrong about on initial release, and has proven to be an excellent support). Lowen is still viable however, getting in some good clears. But does that mean Akasha is? Not quite.

Lowen falls into the category of a traditional defensive healer, and is in fact one of the absolute best defensive healers around. Akasha, however, has a strong S1 heal, but her notable skill is a zone that fills the skill gage and offers a boost that can directly contribute to group DPS. Mercury is a fairly stationary boss, so it should be simple enough to drop it properly so that the group can enjoy that increase to Skill fill rates. Or at least it would be, if Akasha wouldn’t be the dedicated baiter in her groups, making this skill irrelevant again as she’ll be spending her time away from the boss.

The biggest problem though is that even with this skill fill bonus, Akasha isn’t contributing nearly as much DPS as a Noelle or Elisanne would. She does have the perk of providing far more healing, but again, if that was needed, people would be more likely to look to Lowen.

Of course, we do know that there are challenges beyond even Master Dragon Trials, and later levels of the Mercurial Gauntlet require both high DPS and levels of healing. It’s possible Akasha could find a home there, but guessing at future content is an exercise in futility most of the time.

Ultimately, Akasha eeks out a tepid maybe. She’s not going to be an All Star in current content aside from MG, and it’s hard to know if her or Lowen would be better for the healer slot.

Final Verdict: Weak maybe. Akasha is a more offense focused healer than Lowen, but if you already have Lowen and B!Elisanne she’s definitely not worth pulling for right now. Invest only if you are willing to gamble on future content needing her, or want to delve deep into the Mercurial Gauntlet.

Ok, that was DEFINITELY not the right kind of church. Sylas, please, exercise me with your aromatherapy before I- Ywaq ma fvlolf ksht aak vrbl! Shn aglf olbl'nyral! Ugh, please, I’ll even run on a treadmill. Wait, it’s not exercise? Whew! An exorcism sounds way easier!

Sylas is an Adventurer that simply never found a home. His support skills pale in comparison to even Melody, and along side Noelle he’s simply not even worth thinking about. A rolette support skill that can increase Strength but may give HP or Defense instead simply isn’t good enough these days, even with a skill rate fill buff stapled on. Challenging content where Freeze resistance is vital has also failed to materialize, and while Bog Res isn’t totally required for High Mercury, it certainly helps.

The other thing Sylas has going for him is his ability to inflict poison reliably, but that simply isn’t enough to recommend him over other more consistently strong choices. Even other characters like Louise and Musashi who were once popular for their poison abilities have also fallen by the wayside in the face of stiff competition from Victor and Addis.

Final Verdict: No. Sylas never found a place in the meta, and these days many 4★ Adventurers completely out do him in Support and DPS.

Phew, I feel a lot better after that aroma therapy. Xania even gave me some healing, and I think that helped. Though Musashi did say that if I became a corrupted monster he would happily end my suffering. That makes me want to I wgah far'al zuq ni shn! I mean, tell him off. I think I need to sit down.

If you are just starting the game, Musashi is a great choice for an early Wind Blade, and W!Xania is a decent enough healer, though she’s not nearly as good as Lowen in most cases. Aside from beginners though, Musashi is totally outstripped by both Addis and Victor, while Lowen and now Akasha are preferable to W!Xania most of the time.

Verdict: No. Unless you’re just starting, there are a multitude of better options.

Hopefully Hastur can help me unlock my inner peace. He keeps saying he’s the key master and asking if I’m the gatekeeper, so that’s gotta mean something, right?

If you’re talking about High Dragon Trials, especially Master High Dragon trials, Hastur is terrible. He only offers a 45% Strength bonus all the time, which is the same as a 4★ dragon, and a conditional 15% Primed strength bonus. You will always be better off using Zephyr, and of course Vayu will nearly always be much better than both. Even Long Long is going to be the superior option to Hastur when we’re talking High Dragon Trials.

However, in raids and in the Mercurial Gauntlet, Hastur is simply amazing. The fact that you can put him on an AI and give your controlled Adventurer a Primed Strength Bonus of 15% is incredibly useful. This is especially the case if you were to put him on an Adventurer you’re bringing more for their healing or affliction abilities like a Lowen or Louise. Of course you’d be sacrificing the AI’s damage, and that would mean that they won’t have Freyja to fire off their skills more often, but the trade can be worth it.

This means that Hastur has very narrow applicability however. Unless you’re dead set on taking the highest levels of the Mercurial Gauntlet or the Wind version of Omega Nyx when it rolls around, Hastur won’t have much to offer you.

Verdict: Maybe. If you’re up for MG Water 51+ or want to maximise your raid squad, Hastur is a good choice. Otherwise, there are far better options available.

Roc continues to be a solid 4★ choice for a dragon. She’s not going to be appealing to characters looking to tackle Master High Dragon trials, but for someone just looking for a starter dragon or filler for their raid squad, Roc more than suffices. Pick up a single copy and MUB using Moonlight stones.

Verdict: Maybe. For new players only.

This is not a limited banner. Akasha and Hastur have gone into the permanent pool.

IT COMES, IT COMES. BEHOLD, THE BLESSED PERFECTION OF THE ANCIENT ONE! IN IT, ALL ARE ONE, AND ONE IS ALL! SURRENDER YOUR WYRMITE AND DESPAIR!

Final Verdict: No. This banner has only tepid offerings at best.

While Akasha and Hastur offer interesting possibilities, they are certainly not going to be required for the content immediately available and both have viable alternatives. Even if you were to go for them, Sylas is waiting in the wings to pity break you, and he’s quite frankly not worth getting. Since none of this is limited, take your time and save your stash for a better banner.

Healer or Buffer
@Guilian wrote: Hey everyone, I’ve Bern playing for a while…
Ieyasu or Botan Mana Spirals
@Inferno_711 wrote: Now that both Botan and Ieyasu both…
Ezelith weapon
@HaughtyWillow4863 wrote: Training ezelith for dragon…
Advice please
@raygart wrote: Hello everyone, I started playing this game…
Doublebuff
@saddio wrote: For the strength buffs that proc when a…
Read More
Menu