Should You Summon: A Voracious Visitor 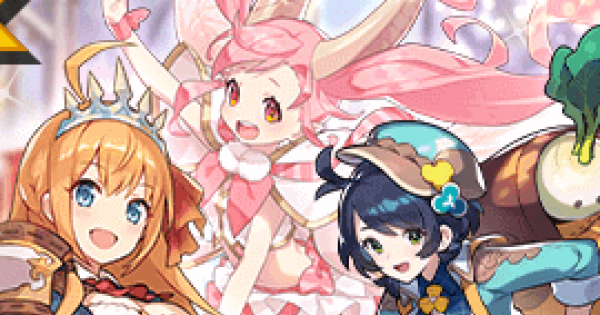 FINALLY! We get a girl who understands me! I'd hang out with Pecorine more, but with the two of us together we'd be certain to wipe out all the Pipples, I mean, food, in a ten mile radius! Or do we use kilometers? Who cares, I'm hungry!

Dinner and a prize? Oh, I love happy meals!

If you are a fan of Princess Connect, I assume you've already summoned for Pecorine. That's fine, you should always go for the Adventurers you love. As someone who has no interest in that property can only say that anyone who goes in for the mass slaughter of Pipples has my approval.

Into the more nitty gritty, Pecorine is a very tanky selfish DPS. She benefits greatly from having a consistent source of recovery, as whenever she regains HP she gets a 10 second strength buff, though it can only activate every 20 seconds (and she can usually get pretty close to that window herself). She also boosts her own defense, so she can somewhat utilize double buff skills, though to really take advantage of that she needs another defense up in the party.

Additionally, Pecorine's S1 reduces Shadow Damage by 10% for ten seconds, and is empowered when her Gourmand Gage is filled (which takes two s2 activations). This doesn't take long as both her S1 and S2 have low SP costs and are fairly spammy. She hits decently hard normally and has enough self buffs that she can put out some nice big numbers, but all of it only adds up to her being not quite as good as Gala Luca when it comes to selfish Light DPS (and she's not as good as Gala Prince in most situations due to his bevy of team buffs, though her solo DPS is better). Still, top 3 DPS in Light is a good place to be, even in the fairly anemic Light Element.

In a new wrinkle, Pecorine is a permanent Adventurer, not a limited one. This makes it somewhat harder for me to recommend summoning for her, as since she's going to always be available, I don't see any reason to go hard for her now when she doesn't appear to be meta defining. She's certainly good enough to be worth getting and using, but she's not so hot that I would be willing to tell you to go all on for her.

Verdict: No. Pecorine is a permanent Adventurer who is merely "Good" not great.

Mitsuba was already my favorite chef, but now she's getting her own ingredients! Let me tell you a secret to tasty dishes: Butter. It goes on everything! Yes, even Pizza. You put the butter IN the dough, silly, not on top of the pizza. And don't get me started on Butter Burgers. Yum. Also, even vegetables taste super good when sautéed.

Wait, what were we talking about again? My mouth is watering.

While the original Mitsuba is something of a scourge that they had to Element Lock new quests to prevent her from unleashing her fury upon, this version seems far tamer. As in "She doesn't grant Inspiration so Karina can't just insta-gib bosses." Still, Forager Mitsuba has a cool buff zone that increases Skill Damage. It's only 10%, but this is one of the first Skill Damage boosts that we've seen. It also combo countsto add 10% crit and 5% strength, but even with that the numbers are low enough that it's not a recipe for cheese, just some light flavoring. It's probably worth waiting until you get a 45 hit combo to use this skill though, as the highest buff level is pretty decent. Even then, it really can't stand up to Wind Giants like Tobias or Summer Sinoa when it comes to Wind Buffers.

This forager also inflicts Bleed, which is cool, but Bleed never really got the Punisher Print it needed (Catch Me in the Sunflowers offers only 4%, which is paltry and not worth using in most cases). Mitsuba can inflict Poison with her Force Strikes after using her S2, which is good but Wind has a lot of poison sources and her's is not especially potent or long lasting, being only 15 seconds long.

All this adds up to Forager Mitsuba being below even the top 10 for Wind DPS, selfish or buffer. You're better off using a number of other Adventurers, such as Templar Hope for Double Buff abuse, Lin You for sheer damage potential, or Sylas for his good poison and myriad of buffs.

Verdict: No. A permanent merely decent Adventurer is not someone you would want to pull out all the stops for.

To be brief, the new Pandora is good. She's a solid dragon with a good Aura that has the simple condition that you need to have a self buff in your kit, somewhere. There will be brief windows where you will drop down to 60% and that's kinda bad, but generally she offers a decent boost.

She is not, however, on the level of Thor or Daikokuten by any stretch of the imagination. Sure, Pandora is probably better than most Light Dragons, but she's not going to be a top choice for anyone any time soon.

Verdict: No. If you were going to summon for a Light Dragon, the last banner or one with Gala Thor was the place to do it.

Let me be blunt: Unless you are an enormous whale who has money to burn on this game, the prizes are quite simply not worth it. The only prizes that are, in fact, really worth your while are the Twinkling Sands as well as the Sunlight Ore or Stones. But the odds of you getting any of those are so faint, it's just not worth summoning to try to get. The rest of the items are things you can easily grind for and get eventually without having to blow wyrmite or worse, diamantium, on this banner. You're better off summoning on a banner that has a dragon you want and unbinding it by getting dups, so low are the odds of getting Sunlight Stones or even ore.

Now, don't get me wrong, it's fun to get prizes. But nearly all of this is something you can get through grinding. It will save you time to get it from the gatcha yes, but if you're looking to get the most out of your wyrmite, using it on refreshes is going to be more profitable for you.

Verdict: No. Prizes are not good enough to be worth blowing wyrmite on. If you get lucky, you might get ahead of the curb, but that's true on literally any banner and the odds are better there too.

On this banner, all the offerings you can get through Wyrmsigils are decent but not great. If you go in looking for Pecorine, obviously you should just use sigils on her (or another unit if they caught your fancy) if you go dry. Otherwise, just pick one you like the best. Unless you have a gap in your roster none are must haves and all are good enough to use for most content.

Standard rates. Despite being a crossover character, Pecorine is going into permanent pool. As are the other adventurers.

Final Verdict: No. Unless you are a huge Princess Connect fan, I'd probably wait to gorge on something else.

Considering everything here is going into the Permanent Pool and there is no boosted rates, and they're going to be on the next Showcase Banner, I'm going to give this a hard pass. Perhaps next banner will be more appetizing.