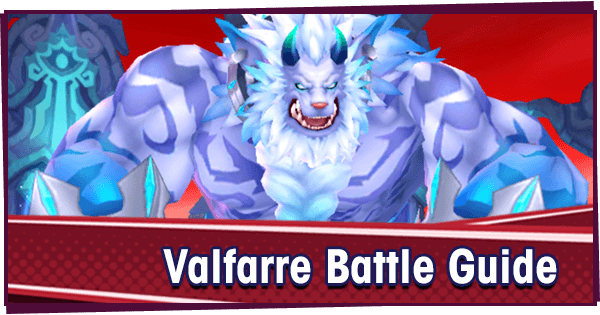 First, there are several story maps to clear. These are very easy, with Might requirements ranging from 1500 to 1900. Boss Battle: Aquatic Cyclops Assault is required to then access the raid battle.

Because of the recent changes to Co-op play, Getherwings + Otherworld Fragments are required to host or join a raid battle. There is currently no way to use Stamina for the raid boss.

Otherworld fragments can be obtained by clearing the Boss Battle: Aquatic Cyclops Assault or through Emblem rewards during the event.

Valfarre is a braggart who loves to show off, sporting some hard-hitting moves.

Ku Hai: Force Strikes can whittle down the Overdrive bar, so Ku Hai is a decent lead character for this fight. With AI though, he won’t be hitting as hard.

Ranzal: A sturdy F2P Bog-Resistant choice who can sub in for deathless clears.

Lowen, Sophie, Hildegarde: The top healer choices for this raid. Lowen is by far the best thanks to his strong healing output and clearing Bog. Sophie and Hildegarde are riskier choices, but can stay alive with good Dragons.

Ieyasu, Addis: Because Bleeding scales with the enemy’s maximum HP, stacking the effect on Raid bosses does massive damage over time. Note however that Ieyasu is a neutral matchup and both characters lack Bog Res; be prepared to control these two and keep them safe.

Garuda/Stribog: These HP Dragons are the best choice for healers like Lowen and Sophie. They can also be used to help get deathless clears.

The player-controlled Adventurer does best with a damage wyrmprint such as Valiant Crown, Plunder Pals, Crystalian Envoy, Jewels of the Sun, Resounding Rendition, Heralds of Hinomoto or Flash of Genius.

On the three AI-controlled Adventurers, equip a Shapeshift Prep Wyrmprint. This works since Shapeshift Prep is compounded in raid groups. When four players have three Adventurers each with 8% Shapeshift Prep, this gives a 96% boost to everyone's Dragon Gauge. Dragon Arcanum is a common farmable 2★ Wyrmprint with 5/8%, while Dragon's Nest and King's Countenance are summon-only with 8/10%.

Raid bosses aren't the same as regular bosses-- Although they have a Mode Gauge, they have multiple parts each with their own HP bar. Destroying these parts is not necessary, but it can make certain attacks less dangerous or stop appearing. Damaging a part will lower Valfarre’s overall health, and destroying one grants Dragon Gauge and incapacitates him for a short period.

The most important initial targets are Valfarre’s left and right hands. Destroying one will weaken his Claw Crash move, a lattice-shaped AoE that’s devastating to teamamte AI. The tail, meanwhile, drops extra rewards.

Claw Crash can be tough to avoid, even more so if using an Adventurer who moves around while attacking. Since melee Adventurers are stranded on safe spots, ranged attackers become especially during this attack.

This time, the special endeavor requires Valfarre to be defeated within 90 seconds.

It’s recommended to have at least 1400 Strength on the team leader, who should be a damage-dealer. The rest of the team should be filled out with Wind-attuned damage dealers (although a healer can be a good idea, if survivability is a problem).

The Shapeshift Prep strategy is the easiest way to clear the Raid. Set your team up with the following for the best chance of success.

There are two main approaches to fighting Valfarre on Special: Parts, and no parts. Doing parts involves choosing to focus his Left or Right hand, while no parts means just attacking into his body. It’s not clear which strategy is better, but it’s a good idea to make sure all players are on the same page.

Run past his Fog Breath attack and Shapeshift, then begin to pour as much damage as you can into Valfarre. You’ll want to be using Shapeshift as often as humanly possible during this battle. A clever way to avoid Claw Crash is to use a Dragon’s Skill during the attack, since this will prevent shifting back from Dragon form.

Phantasmal Wolves can be deadly move since the move does a lot of Overdrive-boosted damage. He’ll use it multiple times, so players must be careful to dodge the purple rings.

Getting the 90 second clear title means beating Valfarre before 1:30 on the timer. If the time goes beyond this, players can simply exit the match before Valfarre is defeated (as completing Special difficulty will require it to be unlocked again).

Note: for those who plan on quitting (if the run doesn’t get the 90 second clear), please avoid hosting raid rooms. When the host leaves, all players are booted, so instead consider joining a room in which other players can continue the raid without being disrupted.