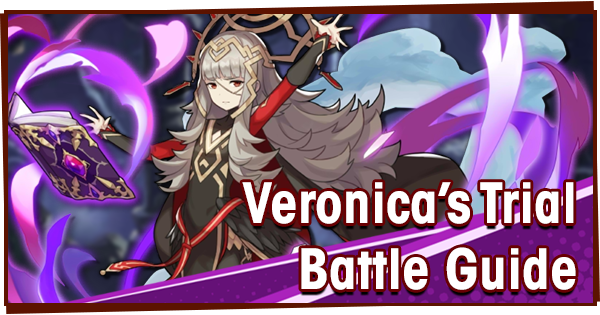 Veronica, Emblian Princess, arrives as a Trial Challenge rivaling the might of Advanced Dragon Trials. With her devastating attacks and limited time on the clock, players must prepare carefully to enter her arena.

It should come as no surprise that Veronica's longtime rival Alfonse of Askr is one of the top choices for countering the Emblian threat. Other good choices are the standard array of high DPS light Adventurers, such as Lucretia, Halloween Elisanne, and Albert. 2k Strength is the rough minimum for bursing down Veronica-- Note that for an off-element Adventurer to be comparable to a Light Adventurer, you need 1.5x as much Strength, so neutral choices such as Marth need at least 3k Strength.

While Veronica can inflict both Curse and Poison, Curse is a far deadlier affliction since it locks players out of Skills and Shapeshifting. Have a healer ready (Hildegarde clears Curse while also being immune) but be sure to equip them with a Strength dragon for maximum damage. With the timer ticking down, every little bit helps. 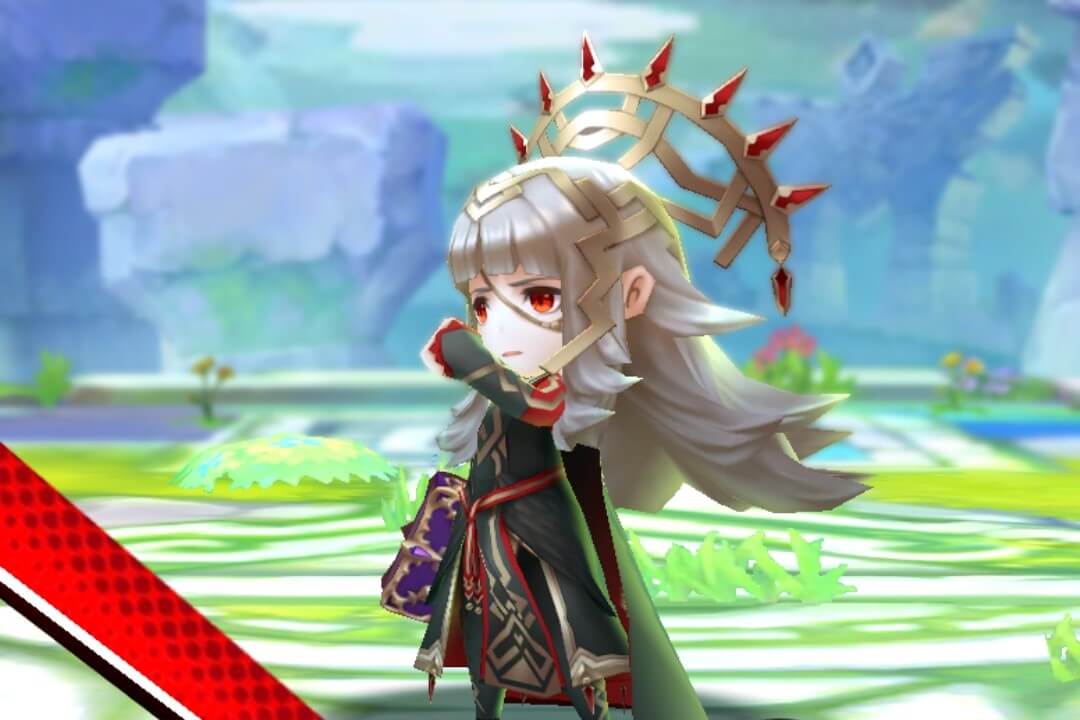 It is imperative to avoid as many of Veronica's attacks as possible. With the exception of her Sphere's of Chaos ability, all of them are fully capable of dealing over 2k damage in a single hit, and often one-shotting whoever is unlucky enough to be in their way. If you have to eat an attack, eating a sphere will deal only moderate damage, and most well-geared Adventurers can take one or two hits from them safely.

Veronica performs these attacks more or less in order, though she often fires off Grim Surge in between her other moves.

Throughout the fight, Veronica will occasionally teleport a short distance around the map. Stay alert and watch her facing as she comes out.

During her regular phase, Veronica opens with a Spheres of Chaos attack. She forms two orbs, then fires them off at 45 and 135 degree angles relative to the direction she's facing. These orbs bounce around the map a few times, so watch for them coming in the opposite direction. Out of all Veronica’s attacks, this is the only one you can safely eat, though it is best to dodge.

Oblivion Fall: A dark orb forms above Veronica, which then crashes down dealing heavy damage.

Grim Surge: This attack builds a red line out in front of Veronica. Being hit by this attack will deal heavy damage, though it can be i-framed. Stand behind Veronica to avoid it.

Ruinous Ring: A purple ring forms around Veronica, then explodes for heavy damage. This attack cannot be i-framed, and you must move close to Veronica or far away to avoid it.

Black hole: A dark orb forms and slowly sucks in everything close to it, with Veronica standing on the edge of the orbs ring. The Black Hole will suck you into the center, and explodes after a delay, dealing lethal damage. You can run far enough away to not be affected by the suction, but if you do you can lose out on DPS. This attack can be i-framed.

This is where the AI falters, and playing in Co-Op with a team becomes key to surviving. Once Veronica’s OD bar fills, she gains a 99% immunity to all attacks and casts Grim Shadows, spawning two shadow clones. They'll perform all the same large AoE attacks-- Grim Surge, Oblivion Fall, and Spheres of Chaos-- making for a very chaotic battle! Luckily they have smaller health pools than Veronica, and the battle effectively ends once they're defeated. Focus down one Shadow Clone at a time to remove them from battle as soon as possible.

Once both Shadow Clones die, Veronica enters an incredibly vulnerable Break state where she takes much more damage. At this point, wail on her as hard as you can until the fight is over.

For defeating this harrowing trial, you are awarded 1000 base Valor. Additionally, a small number of Great Badges and some Badges are earned, along with a few Shadow Orbs, Holy Water, Whetstones, and Crystals. There is also a small chance to obtain Four-Leafed Clovers and Twinkling Grains. For the first clear, you receive a one-time award of a Champion's Testament and additional Great Badges.

Are we allowed to plug our Discord
well if we are, you should join the white sparrows 2.0 Discord …
Where are the shared skill Tomes
Maybe I’m just an idiot but they don’t appear in any of the Treasure Trade menus…
Question about mana spirals
I took a few months off from DL and came back to find that mana spirals exist. My…
Is it worth crafting 4* core weapons?
I’ve just started the game recently, and got the Smithy to level 4. Should I start…
A very random what if
So hear me out. I just recently saw an anime that was at least partially produced by…
Read More