A Waltz with Fate Event Guide 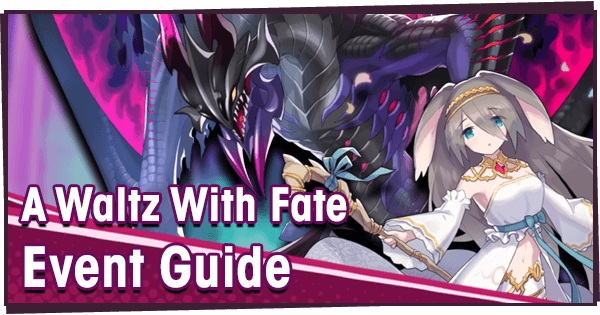 A Waltz With Fate Raid Event

Should you Summon? Thunder and Splendor

Quick Guide for A Waltz With Fate

A Waltz with Fate Event Guide

This Raid event features a new story and pits players against a series of maps culminating with a challenging 16-man Raid Battle. There are many rewards to be obtained, notably including a new 4★ Adventurer, 4★ Wyrmprint and a 5★ Dragon!

There are two main currencies: Peregrine Blazons and Emblems.

Peregrine Blazons are earned through completing Boss Battle: Guardian Sentinel Assault and Raid Battle: Thanatos Clash. They can be used in Blazon Summon, which grants a wide variety of rewards from a continually depleting pool. Once Phantom has been earned from a Blazon Summon, the pool can be refreshed which enables all rewards to be obtainable again. Most importantly, Blazon Summons can also yield copies of Phantom and Delightful Dancer.

Blazons are earned through all difficulties of Thanatos Clash and Guardian Sentinel Assault.

Emblems come in three varieties: Bronze, Silver, and Gold. They are used to unlock one-time rewards, which can be claimed by navigating to Emblems in the event menu. As more types of each emblem are earned, more rewards are unlocked along their respective tracks.

See the below chart for information on where Emblems can be obtained. a lowercase "x" indicates that only a small number of emblems of that type drop from that quest.

The event unit is Felicia, a 4★ Light Staff user. She has Undead Res +15/20% with helps with survivability and Skill Prep to accelerate her initial healing. She’s a useful healer, especially if Hildegarde, Vixel or Halloween Althemia are not owned. Like all free raid units released so far, she lacks +100% Affliction Resist.

Phantom is a 5★ Shadow Dragon who boosts Strength by +20-30%. He stands as one of the best raid Dragons released, being parallel to Pele, and even inflicts Blind through his Skill. However, those with unbinds on Juggernaut or Maritishen likely won’t find him overly useful; his status as a welfare Dragon entails lower overall stats despite 5★ rarity.

This Wyrmprint grants 15/20% Poison Resistance and +3/5% Recovery Potency, making it a great Wyrmprint choice for Adventurers without 100% Poison Resistance, especially Felicia. There is no limit to how many can be obtained, and they are earned through the following ways:

When clearing the Raid Battle, players can destroy parts of Thanatos to claim a large number of Blazons as a rewards. There is also a small chance for a Golden Fragment to drop. Ten Golden Fragments can be combined to form a Golden Key, which is used to unbind a five star Wyrmprint by one stage. On Special difficulty, whole Golden Keys can be earned alongside Summon Vouchers.

Other notable rewards include:

Wyrmite, Summon Vouchers and other rewards can be obtained by completing daily and limited endeavours relating to the event.